Need horse supplies delivered right to your door? Give our sponsor, Chewy, a try! 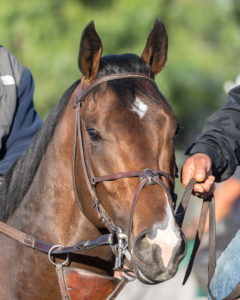 It has been more than eight months since the announcement that Omaha Beach was being scratched from the Kentucky Derby sent a wave of shock through the horse racing community.

Many believed that he would be the one to wear the roses on the First Saturday in May and he was deservedly labeled the morning line favorite for the first jewel of the Triple Crown. Omaha Beach had, in fact, already beaten other top horses who would be in the Derby, like champion Game Winner and the highly regarded Improbable, in the Rebel Stakes (GII) and Arkansas Derby (G1), but while those runners were being loaded into the Churchill Downs starting gate, he was recovering from surgery to fix entrapped epiglottis.

He didn’t start at all for four months after the Derby scratch and faint whispers of “he’s never coming back” began to ripple throughout the racing community. When his was finally announced, it was in a sprint race – the Santa Anita Sprint Championship (G1), to be exact. There was much debate on whether or not Omaha Beach could win at such a short distance, especially against a dangerous speedster like Shancelot. But in typical Omaha Beach fashion, the young colt used every ounce of heart and power he had to win the race by a nose.

With the return of Omaha Beach came the re-emergence of his staunch supporters. They believed in him so strongly that they sent him off as the favorite in the November 2 Breeders’ Cup Dirt Mile (G1). Further back than usual in the beginning stages of the race, Omaha Beach found it impossible to catch the winning Spun To Run before he got to the wire and he had lost one of the biggest tests of his career.

Nevertheless, he was sent off as the favorite in the Malibu Stakes (G1) in his final race of the year and this time, without Spun To Run in his way, Omaha Beach romped.

There is one last race on the agenda for Omaha Beach before he retires to take up stallion duty at Spendthrift Farm — the $3 million Pegasus World Cup (G1) at Gulfstream Park on Saturday. And though the War Front colt won his last race in stunning fashion, there are a few things that could stand in his way of victory.

To start, the race is contested at a distance of nine furlongs (1 ⅛ miles), which Omaha Beach has not tested since his victory in the Arkansas Derby last April. He will also have to face Spun To Run, the horse who defeated him decisively in the Breeders’ Cup. And in addition to Spun To Run, Omaha Beach will have to fend off a sea of talented runners, like Pacific Classic (G1) winner Higher Power and the returning Mucho Gusto.

Omaha Beach has been at Gulfstream Park for nearly three weeks and looking absolutely fantastic. He has turned in two fabulous workouts in preparation for the Pegasus, including his final breeze of five furlongs in 1:00.72.

A victory in the Pegasus World Cup would be the icing on the cake for the career of Omaha Beach.

Omaha Beach (War Front–Charming, by Seeking The Gold) was bred by Charming Syndicate INC.
He is owed by Fox Hill Farms (Rick Porter) and is trained by Richard Mandella.
He will be ridden again by regular rider Mike Smith.
He has a record of 10-5-4-1, $1,651,800.