Get all your horse supplies delivered right to your door! All orders over $50 ship free! 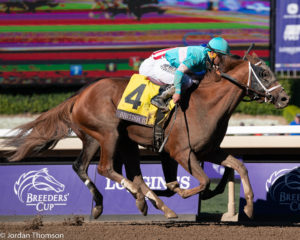 Seven talented fillies whose connections are no doubt eyeing the May 1 Kentucky Oaks (G1) will race 1 1/16 miles in the $300,000 Rachel Alexandra Stakes (GII) at Fair Grounds on Saturday. Champion and Breeders’ Cup Juvenile (GI) fillies heroine British Idiom will make her sophomore debut after getting a brief freshening and a string of exceptional works over the Louisiana oval’s main track for trainer Brad Cox Jr..

The Rachel Alexandra Stakes was first contested in 1982 as the Davona Dale Stakes, named after the champion filly and Hall of Famer Davona Dale, who raced in New Orleans in the late 1970s and won the Kentucky Oaks (GI), Black-Eyed Susan Stakes (GI) and Acorn Stakes (GI) for owner/breeder Calumet Farm and trainer John Veitch. In 2001, Fair Grounds renamed the race for another champion, the Mike Pegram-owned and Bob Baffert-trained champion Silverbulletday, who won the Davona Dale in 1999 en route to capturing the Kentucky Oaks and Black-Eyed Susan Stakes as well. She was inducted into racing’s Hall of Fame in 2009. 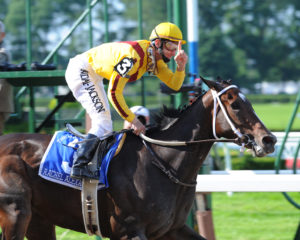 A year after Silverbulletday’s induction into the most coveted club in racing, the race got another name change, this time to honor the 2009 Horse of the Year Rachel Alexandra, who went on to win the Kentucky Oaks and beat the boys in that year’s Preakness Stakes (GI), Haskell Invitiational Stakes (GI) and Woodward Stakes (GI). She was retired in 2010 and was inducted into the Hall of Fame in her first year of eligibility in 2016.

When this race was renamed for Rachel Alexandra, the Tiffany Lass Stakes, which is traditionally is offered in January as a prep for this event, was renamed to continue on the name of Silverbulletday.

In addition to the two winners the race has been named for, other notable fillies to have crossed the wire first in the traditional prep for the Fair Grounds Oaks (GI) includes Prospectors Delite, the dam of grade 1 winner and leading sire Mineshaft; fellow notable broodmare Take Charge Lady; and champions Indian Blessing and Untapable. Two years ago,Kentucky Oaks heroine and champion Monomoy was victorious here before logging her incredible 2018 season and last year, Serengeti Empress was victorious before going on to a Kentucky Oaks win.

This year’s Rachel Alexandra offers 50 points to the winner, and points on a 20-10-5 scale for second through fourth, toward making the gate for the May 2 Kentucky Oaks and is the first race so far this year with a hefty points offering.

His Glory – 10/1 – Trainer Tom Amos, who sent Serengeti Empress out to win last year, will tighten the girth on this $52,000 daughter of Mineshaft, who will lead the field to post under James Graham. She has a win and an allowance race to her credit in seven career races so far but has yet to make a statement in five starts in stakes company. She is bred for the distance, but she seems a cut below the top here.

Ursula – 8/1 – This gray daughter of leading sire Tapit ran a better-than-it-looked second in the Silverbulletday Stakes last out and will only benefit from extra distance. She can be on the lead or off it, and jockey Mitchell Murrill will have to get into good position near the front early from the break. Her best certainly could earn her a share.

Swiss Skydiver – 8/1 – This maiden winner makes her fourth start and her first since running out of ground and finishing fifth in the seven furlong Gasparilla Stakes at Tampa Bay Downs last month. This Kenny McPeek-trained daughter of Daredevil should like the added distance and the probably quick pace in front of her, she just needs to get to the wire on time under jockey Brian Hernandez Jr.

Impeccable Style – 12/1 – McPeek also trains this daughter of Uncle Mo, who faces winners for the first time as a 3-year-old and in her first race since breaking her maiden by 2 ½ at Churchill Downs at the end of September. She’s been training great at Gulfstream Park for several weeks and she could be tough in her first start beyond seven furlongs.

Tempers Rising – 6/1 – Mark and Helen Stanley went to $70,000 for this daughter of Bayern and in her six-race career so far she’s nearly doubled her purchase price while never finishing worse than third. She had a wide trip from off the pace in the Silverbulletday Stakes last time out and figures to run better with added distance. A hot pace in front under Julien Leparoux will only help this Dallas Stewart trainee.

British Idiom – 8/5 – this talented daughter of Flashback completed an undefeated juvenile season of three wins, which included the Alcibiades Stakes (GI) and Breeders’ Cup Juvenile (GI) and makes her sophomore debut here for trainer Brad Cox Jr. She doesn’t even need to run her best race to beat most of this field, but she’s always kind of been an overachiever and nobody will be surprised if she shows up and gives it her all. Javier Castellano will be back aboard.

Finite – 2/1 – This $200,000 daughter of Munnings carries a four-race win streak into this race, which includes the Golden Rod Stakes (GII) at Churchill Downs in November and the Silverbulleday Stakes here last out. The Steve Asmussen trainee is probably the runner who will give the favorite her biggest challenge. She’s got to hustle past speed to her inside, but if jockey Ricardo Santana Jr. gets her out of the gate and into a comfortable position on or near the pace, she could be tough to run down in the lane.