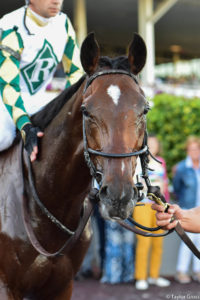 A field of 12 3-year-olds headed by Sole Volante will compete for the winner’s share of a $400,000 purse in the 40 th edition of the Grade II Lambholm South Tampa Bay Derby on Saturday at Tampa Bay Downs.

The Lambholm South Tampa Bay Derby is one of five stakes, four graded, on a Festival Day card offering $1-million in stakes purse money alone. It is also a “Road to the Kentucky Derby” points race, awarding qualifying points for the Run for the Roses on May 2 to the first four finishers on a 50-20-10-5 scale.

The five stakes will be run consecutively, comprising a Festival Day Pick-5 wagering offering, with the Columbia as the seventh race, followed in order by the Challenger, the Hillsborough, the Florida Oaks and the Grade II Lambholm South Tampa Bay Derby.

Sole Volante, the lone gelding in the field, drew the No.7 post position for the mile-and-a-sixteenth Lambholm South Tampa Bay Derby on the main dirt track and has been established as the 2-1 morning-line wagering favorite, based on his impressive victory here on Feb. 8 in the Grade III Sam F. Davis Stakes.

Now 3-for-4 in his career, Sole Volante is owned by Reeves Thoroughbred Racing, Andie Biancone and Limelight Stables Corp. and trained by Patrick Biancone. Florent Geroux will be the jockey, replacing Sam F. Davis-winning rider Luca Panici, who suffered a fractured collarbone in a fall on Feb. 21.

The second choice at 5-2 is Chance It, a Florida-bred colt owned by Shooting Star Thoroughbreds and trained by Saffie Joseph, Jr. He will break from the No. 4 post under jockey Paco Lopez.

Chance It is 4-for-6 with three stakes victories, including a triumph in the Mucho Macho Man Stakes on Jan. 4 at Gulfstream Park in which he defeated Sole Volante. Chance It was scratched from last Saturday’s Grade II Fasig-Tipton Fountain of Youth at Gulfstream because of concerns about breaking from the extreme outside No. 11 post position and the short run to the first turn. Although Sole Volante and Chance It possess excellent credentials, the high stakes involved virtually ensured a large Lambholm South Tampa Bay Derby field.

Todd Pletcher, who has trained five Tampa Bay Derby winners, including three in a row from 2015-2017, will send out three lightly-raced starters: maiden winners Market Analysis and Texas Swing along with Unrighteous, who is still a maiden.

Jehozacat, who is trained by Arnaud Delacour, captured the Grade III Lambholm South Endeavour Stakes on the turf here on Feb. 8, her second stakes victory of the meeting. Starship Jubilee, who is a career millionaire, is 16-for-34 lifetime, including a victory in the Grade I E. P. Taylor Stakes on the turf at Woodbine on Oct. 12.

Altea is looking for her first stakes victory, but was a fast-closing second in the Lambholm South Endeavour.

Here is the full Grade II Hillsborough Stakes field in post position order, followed by each horse’s trainer and jockey:

The Florida Oaks has produced two winners of the Kentucky Oaks at Churchill Downs, Luv Me Luv Me Not in 1992 and Secret Status in 2000. That was before the race was switched to the turf course in 2011, achieving Grade III status in 2013.

This year’s event has drawn a field of 12 sophomore fillies, led by undefeated (4-for-4) New York Groove, owned by Commonwealth New Era Racing and trained by Michael Trombetta. The daughter of Verrazano posted back-to-back stakes victories last fall in the Presque Isle Debutante Stakes at Presque Isle Downs and the Glorious Song Stakes at Woodbine. All of New York Groove’s races have been on all-weather synthetic surfaces, as opposed to dirt or turf.

Here is the full Grade III Florida Oaks field in post position order, followed by each horse’s trainer and jockey:

Heading this year’s field is 5-year-old gelding Admiralty Pier, owned by Hoolie Racing Stable and Bruce Lunsford and trained by Barbara Minshall. Admiralty Pier notched his first graded stakes triumph here on Feb. 8 in the Grade III Tampa Bay Stakes. Other likely contenders are Prompt, from the barn of Bill Mott, and Noble Drama, trained by David Fawkes, who appears to be in excellent form.

Here is the full Grade III Challenger Stakes field in post position order, followed by each horse’s
trainer and jockey: