Chewy has all of your horse supplies and they can be delivered right to your door. You don’t need to go out during this stay-at-home time! Click to browse and save! And remember, shipping on orders of $50 or more is free! 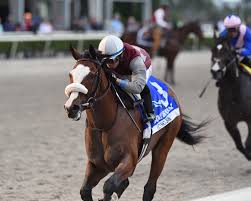 Sackatoga Stable’s Holy Bull Stakes winner Tiz The Law is the early 6-5 favorite in a full field of 12 for Saturday’s $750,000 Curlin Florida Derby (GI) at Gulfstream Park, the last prep event for the September 5 Kentucky Derby (GI) for a while thanks to the global pandemic known as COVID-19. The 1 1/8-mile main track test for 3-year-olds will be the main event on a 14-race program that features 10 stakes, six of which are graded, worth $1.825 million in purses.

Tiz The Law, who carries the same connections as 2003 Kentucky Derby winner Funny Cide, has already earned 22 points to make the gate for the Run for the Roses via the Road to the Derby points system, and seeks the 100 points on offer for this race, which will guarantee him a spot in the starting gate under the Twin Spires. Additionally, second through third will earn points on a 40-20-10 schedule.

“One of the big reasons is we want to get our points and then not have to worry about that and hopefully keep him healthy and sound so we’re able to actually run the race on the first Saturday in September,” Jack Knowlton, managing partner of Sackatoga Stable, said.

Tiz the Law bypassed the Fountain of Youth, which was won by Ete Indien in dominant fashion, but regardless his connections believe he earned the role of early favorite and the runner to beat.

“He certainly proved in his last race that he can run off a layoff, so I don’t think there’s any question about that,” Knowlton said. “He showed he liked the track there at Gulfstream. Probably the top competitor there is a horse that we beat in Ete Indien. We beat him going a mile and a sixteenth and I think our horse is absolutely well suited to go more than a mile and a sixteenth. A mile and an eighth to him, I don’t think is any challenge to him at all.”

Tiz the Law also won last year’s Champagne Stakes (GI) and was third in the Kentucky Jockey Club Stakes (GII) at Churchill Downs. Jockey Manuel Franco has the return mount aboard Tiz the Law Saturday and the pair will break from post position seven. 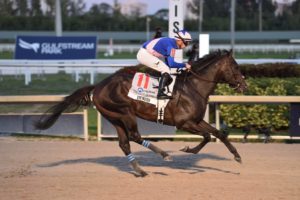 Ete Indien turned a second behind Tiz The Law in the Holy Bull Stakes into an eight-length triumph in the 1 1/16-mile Fountain of Youth last out a month ago. The frontrunning son of Summer Front drew the outside that day, but was hustled to the lead under jockey Florent Geroux, controlled the pace and drew off easily to the win. He drew the outside again for this race, but the experience having overcome it before, plus the added distance, could only help.

“I don’t think he has a problem with stamina,” Biancone said. “He’s very manageable. The other day (in the Fountain of Youth), we had to ask him to get out of a bad hole. When he got the lead, he relaxed immediately and he was very manageable. Florent said he came back to him very nicely. He slowed down and relaxed.”

Ete Indien broke his maiden at first asking when sprinting on the turf last September and after a dismal performance around two turns on the turf in a stakes at Keeneland, he was switched to dirt and won at a mile easily, then was second in the Holy Bull before the Fountain of Youth win.

“The horse keeps improving from race to race,” Biancone said. “Hopefully, he’ll keep improving and we should have a really good horse in the summer.”

Trainer Todd Pletcher, who has saddled a record five Florida Derby winners already, will be represented by Gouverneur Morris and Candy Tycoon in his quest for a sixth winner of Gulfstream’s signature race for 3-year-olds.

Team Valor International and WinStar Farm LLC’s Gouverneur Morris, who broke his maiden by nine widening lengths at Saratoga last summer before finishing second in the Breeders’ Futurity (GI) to end his juvenile campaign, has raced only once this year, capturing a one mile and 40 yard optional claiming allowance at Tampa Bay Downs by 1 ¼ lengths.

“I thought it was a good comeback,” Pletcher said of the allowance race. “It wasn’t a cupcake field. He finished up well and seemed to come out of it and has trained strongly since then. We weren’t 100 percent sure what his next start was going to be, but based on the strength of his last breeze and the fact that the Florida Derby is right in front of us we felt like we better go ahead and go now.

“He’s training as well as ever. I thought in particular his last breeze was the one we were hoping for and kind of sold us on the time to go is now.”

Pletcher’s other runner, Mathis Stable LLC’s Candy Tycoon, was second behind Ete Indien in the Fountain of Youth in his last start. The son of Twirling Candy broke his maiden by four lengths in his fifth start at Gulfstream Park a month earlier in his first start around two turns.

“The last race was an improved performance by him,” Pletcher said. “He’s one that we’ve kind of had high hopes for. He’s kind of frustrated us a little bit because he trained a little better than he had been running in the afternoons but that was kind of the first time he settled off the pace a little bit. He seemed to make a move forward doing that.

“This race on paper appears to have plenty of pace so it could be a good setup for him, but once again he needs to step up and make another move forward to get a piece of it.”

Hall of Famer John Velazquez has the mount aboard Gouverneur Morris, while a rider for Candy Tycoon hasn’t been named after Javier Castellano tested positive for the COVID-19 virus earlier in the week. 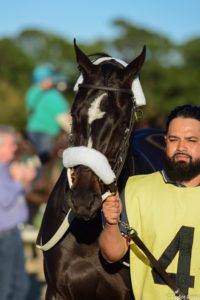 “With the shift in the schedule and the Kentucky Derby pushed back four months, we’re really viewing this as our Kentucky Derby right now,” Eclipse Thoroughbred’s Aron Wellman said.  “It’s prestigious Grade 1 that’s very meaningful to his stallion potential. His sire won it, his dam’s sire won it, so it would be a huge feather in his cap to be able to add this to his resume.

“We’re treating this as though it’s the Kentucky Derby right now. Hopefully he’ll be able to use this to propel himself toward the first Saturday in September, but that’s a long way off. This is an important Grade 1 on the calendar right now.”

Eclipse Thoroughbred Partners will also be represented by Soros, who is trained and co-owned by Gustavo Delgado. The son of Commissioner makes his sophomore debut in his first start since winning the Smooth Air Stakes at Gulfstream Park West last November 30.

Joel Rosario will ride Independence Hall for the first time and Hall of Famer Edgar Prado will have the return mount aboard Soros.

The field for the Curlin Florida Derby, which is the 14th and final race on the card and set to leave the gate at 6:36 p.m. ET, is: