Sporting events all over the world have been postponed or canceled due to the Covid-19 pandemic, but thankfully the horse racing show will go on this weekend at Oaklawn Park. Since the Kentucky Derby will longer be held on the first Saturday in May for the same reasons, Churchill Downs having previously announced the Run for the Roses will be run on September 5, this year the Arkansas Derby is a worthy substitute and will be run in two divisions to help fill that void.

The Arkansas Derby has long been a premier race on the road to the Kentucky Derby with names like Triple Crown winner American Pharoah, Curlin, Smarty Jones and Afleet Alex using the Hot Springs route to Louisville before capturing the roses. This year’s two Arkansas Derby divisions are not short on talent as they attracted many of the best sophomores from all over the country looking for the lion’s share of the 170 Road to the Derby points awarded to the top finishers in each.

To get ready for this race, let’s take a look at the contenders in each division: 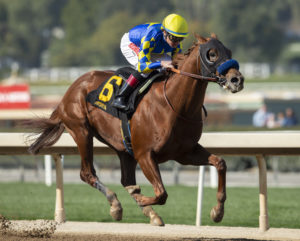 Horse racing fans have been raving about Charlatan. Some say he reminds them of Justify, others just have a good feeling about this horse. The Arkansas Derby will be this colt’s first attempt in stakes company, but his dominant performances in his ,aiden and an allowance/optional claiming company at Santa Anita led his connections and fans to believe that he is more than capable of winning this race. If Charlatan is indeed as talented as he is believed to be, he should have no problem getting the lead and running away with this race.

This Maryland-bred colt broke his maiden at the beginning of this year at Laurel Park. He hasn’t won a race since then, though he did manage to finish second in the Private Terms Stakes at Laurel Park in March. His latest start was in a one-mile first-level allowance/optional claiming race at Oaklawn Park in which he made a late rally to finish third. My Friends Beer has yet to show the talent that some of the other horses in this field have, but has been training well and hasn’t finished off the board yet in four starts this year.

Mo Mosa finished last in the Lambholm South Tampa Bay Derby (GII) in March, his only attempt in graded stakes company. When transferred to Oaklawn Park, Mo Mosa ran third in an allowance/optional claiming event after acting up in the gate. Mo Mosa has a single victory to his name — a maiden special weight ove Turfway Park’s synthetic — and he would have to drastically step up his game to win here. 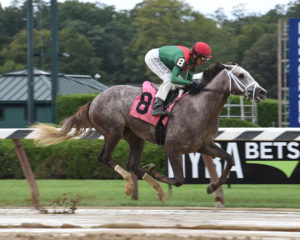 Constitution is a hot sire right now with quite a few of his progeny making names for themselves on the racetrack. Gouverneur Morris added to his sire’s appeal when he broke his maiden at Saratoga and then finished second to Maxfield in the Claiborne Breeders’ Futurity (GI) at Keeneland last fall. This colt has only finished off the board once in his four-race career, which was a fourth-place finish in the Florida Derby (GI). With a good trip, this $600,000 2-year old purchase should be able to put in a strong drive towards victory.

This Calumet Farm homebred broke his maiden at Remington Park before winning the Clever Trevor Stakes in November. He hasn’t won since then, finishing off the board in three consecutive stakes races. Trainer Steve Asmussen has outfitted this colt with blinkers for the Arkansas Derby. He will have to improve drastically to win here.

Scratched earlier in the week after developing a slight fever.

Wrecking Crew was performing very well in 2019, hitting the board in three graded stakes races in California – the Best Pal Stakes (GII), Del Mar Futurity (GI), and the Breeders’ Cup Juvenile (GI). He hasn’t been doing as well in 2020, having finished off the board in two graded stakes races. If Wrecking Crew can return to his old form, perhaps he can hit the board or round out a superfecta. 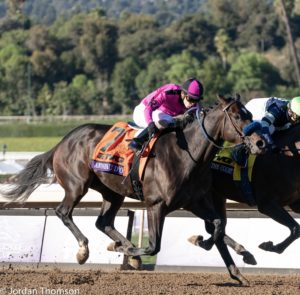 Anneau d’Or looked very promising last year with a second-place finish in the Breeders’ Cup Juvenile (GI) and Los Alamitos Futurity (GII) but he ended up finishing ninth in his 3-year old debut in the Risen Star Stakes (GII). This $480,000 2-year old in training purchase is having his blinkers taken off for his start in the Arkansas Derby. If he can return to his 2-year old form, he may have a shot at hitting the board.

This colt broke his maiden at Fair Grounds in December and his since hit the board in two allowance races at that same track. He recently ran in an allowance race at Oaklawn Park where he crossed the wire first, but was ultimately DQ’d to fifth for drifting in down the stretch. Nevertheless, he has been training well with his most recent work being a 4f breeze in 47.20, ranking him 1/83 horses to work that distance.

10. Crypto Cash (Majesticperfection – Crypto’s Best, by Cryptoclearance)
Trainer: Kenny McPeek
Jockey: Corey Lanerie
Owner: Tommie M. Lewis & Magdalena Racing
Breeder: D.J. Stables (KY)
Crypto Cash has won two races in his six-race career, one at Ellis Park and one at Churchill Downs. He recently finished fourth in the Rushaway Stakes at Turfway Park after stumbling at the start. Still, he was able to make late gains on his foes in the stretch. Crypto Cash has been training well at Keeneland and has decent speed figures to back up his victories. 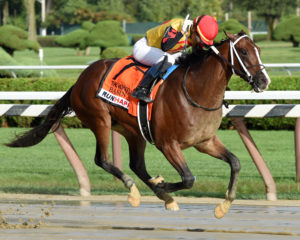 Basin emerged onto the scene when he won the Hopeful Stakes (GI) at Saratoga last summer. He followed that up with a third-place finish in the Rebel Stakes (GII) and a fourth in the Oaklawn Stakes last out. This son of Liam’s Map has only finished off the board once in his entire career. The outside post position may hurt Basin here.

Summary: Charlatan is clearly the horse to beat here, but contenders like Gouveneur Morris are going to attempt to give him a run for his money. There are quite a few good price horses here that could be used to boost all exotics, especially trifects and superfectas.

This one-eyed horse proved that he was worthy of running in graded stakes company when he finished second in the Kentucky Jockey Club Stakes (GII) at Churchill Downs in November. He failed to hit the board in either of his graded stakes attempts since then, however. Finnick The Fierce recently won (after DQ) an allowance race at Oaklawn Park and has been training nicely since then.

Saratogian made his debut a winning one in February at Tampa Bay Downs, but failed to perform better than ninth when runing in an allowance race at Gulfstream Park in late March. Saratogian just seems far outmatched in this race. 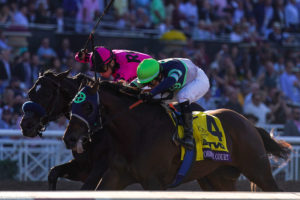 Storm The Court made horse racing headlines when he became the longshot winner of the Breeders’ Cup Juvenile (GI) last November. He has failed to win since then, but finished fourth behind Nadal in the San Vicente Stakes (GII) and third in the San Felipe Stakes (GII). This champion 2-year-old colt has been training well at Santa Anita and might be able to make a run for the victory or at least round out a trifecta or superfecta. 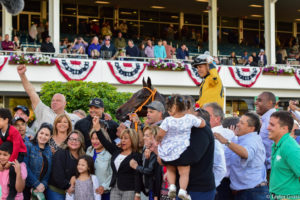 The connections of King Guillermo and jockey Samy Camacho in the winner’s circle after winning the 2020 Tampa Bay Derby. Photo: Taylor Gross

King Guillermo had originally planned to train up to the Kentucky Derby after earning his longshot victory in the South Tampa Bay Derby (GII) two months ago. However, the postponement of the Kentucky Derby has left him with no choice but to prove himself against horses he has never faced before. This $150,000 2-year old in training purchase has strong speed figures and good workouts. If he performs like he did in the Tampa Bay Derby he has a shot at victory or at the very least hit the board here. 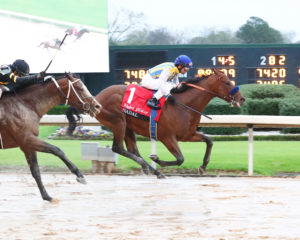 Nadal is another one of Bob Baffert’s stars in the making. This colt is undefeated in three starts with his most notable victories coming in the San Vicente Stakes (GII) and Rebel Stakes (GII). Nadal has been training exceptionally well at Santa Anita and is the horse to beat in this division of the Arkansas Derby.

This son of Honor Code has won two of his eight starts and has hit the board all but three times. He hasn’t ever run in graded stakes company and finished seventh when running in the Riley Allison Derby at Sunland Park in January. Still, he is coming into the Arkansas Derby off of a victory in an allowance race at Sam Houston and has been training decently since that victory. 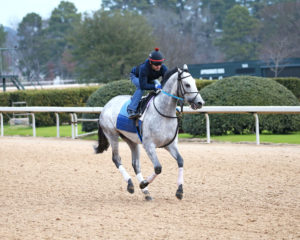 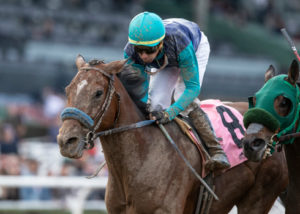 Fast Enough broke his maiden at Santa Anita in late 2019 and then won the California Cup Derby in January. He recently finished third in the San Vicente Stakes (GII) behind Nadal. He has been training excellently and Santa Anita for the past two months and could certainly put in a big performance in the Arkansas Derby.

Taishan has made his last three starts at Oaklawn Park. He finished fifth in the Southwest Stakes (GIII) after bobbling at the start of the race, but won an allowance and finished third in the Oaklawn Stakes. Still, he will have to really improve in order to come close to defeating horses as talented as Nadal.

Farmington Road caught the horse racing community’s attention when he broke his maiden at Tampa Bay Downs in January. He followed that up with a fourth-place finish in the Risen Star Stakes (GII) after going wide all throughout the race. He most recently finished second in the Oaklawn Stakes, defeating fellow Arkansas Derby contender Taishan. Though Farmington Road clearly has a promising future, he will have to step up his game to win this race. 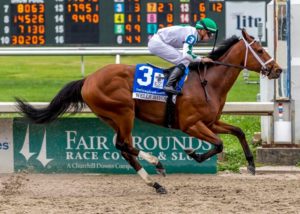 Wells Bayou has been on a roll recently. He has performed very well in both of his starts at Oaklawn Park, winning an allowance race in January and finishing second in the Southwest Stakes (GIII). Most recently, this colt won the Louisiana Derby (GII) despite being bumped at the break. He seems to be a very talented horse and could certainly hit the board, but he will be vying with Nadal to get the lead that he enjoys.

Summary: As in Division 1, Bob Baffert’s horse is the one to beat. Nadal will be hard to defeat, but talented horses like Silver Prospector and King Guillermo will try to get a good trip and pass him in the stretch. There are a few live longshots in this race as well that should be used in exotic wagers.