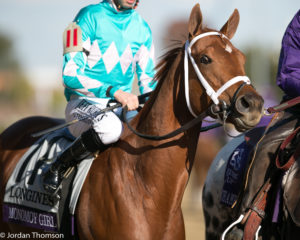 Champion Monomoy Girl will make her long-awaited return to action as one of the 162 horses expected to run on Saturday’s opening day card for the 2020 Spring Meet at Churchill Downs. Eleven races were drawn, which boasts an average field size of 11.3 horses. First post has been set at 1:00 p.m. ET. 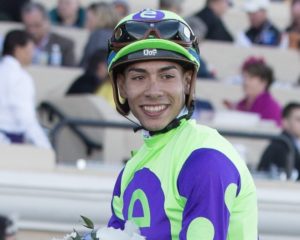 Standout names from the national trainer ranks who have entered horses for the opening-day progam or who have stalls on the Churchill Downs backside include Steve Asmussen, back to defend his leading trainer title, as well as fellow Hall of Fame trainer Bob Baffert, Chad Brown, Todd Pletcher, Jerry Hollendorfer and John Sadler.

Michael Dubb, Monomoy Stables, The Elkstone Group and Bethlehem Stables’ Monomoy Girl, who has not raced since capturing the 2018 Breeders’ Cup Distaff thanks to a significant bout with colic and a pulled hamstring, will face off against six older fillies and mares in the afternoon’s fourth race, an $80,000 optional claiming/allowance race that carries an $85,000 purse. A win in the one-mile main track test will push the now 5-year-old mare’s career earnings past the $3 million mark as her total bankroll now stands at $2,954,750 from a record of 11-9-2-0. The Brad Cox-trained daughter of Tapizar will be reunited with regular jockey Geroux in the day’s fourth race, which has a post time of 2:32 p.m. ET. 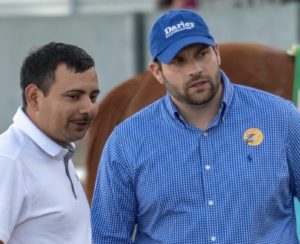 “It’s been a long time coming but we are thrilled for (Monomoy Girl) to return to the races,” Cox said. “She’s been working great down at Keeneland since late March and we’re looking forward to this first step back.”

More than 320 horses have arrived at Churchill Downs and the Trackside Louisville facility so far, with more expected to arrive from Florida on Wednesday. as of 11 a.m. Tuesday, according to senior director of the stable area Steve Hargrave. The first day of training is Wednesday with the track opining at 5:30 a.m. ET.

Racing at Churchill Downs will run on a Thursday-through-Sunday schedule – spectator-free until the government approves fans —  after opening weekend through Saturday, June 27. A total 125 races worth $7,265,000 are set to be contested, including maiden special weight races worth $79,000 and allowance races worth between $81,000 and $88,000. Also, 16 stakes races will be offered with purses totaling $2.25 million. Post time every day will be 1:00 p.m. ET.

The complete stakes schedule can be found here.