Home » News » I’ll Have Another Moving to Japan
No Comments

I’ll Have Another Moving to Japan

I'll Have Another will move to Japan in August to stud.

The 2012 Kentucky Derby and Preakness winner I’ll Have Another is moving to Japan for stud duty. The 2012 Triple Crown hopeful’s highest bidder was announced as Shigeyuki Okada of Big Red Farm on the island of Hokkaido. The financial terms of the deal were not disclosed but experts speculate that the numbers were somewhere between $14-15 million.

I’ll Have Another’s owner Paul Reddam stated that the Japanese bid was much greater than the Kentucky offer. Fans across the nation are taking to blogs and social media to express disapproval of Paul Reddam’s decision. Some fans claim, “This is the dark side of horse racing”. Others are worried that I’ll Have Another will end up in a slaughterhouse after his stud years are over. Most race fans agree that after following I’ll Have Another throughout the 2012 season, it’s heartbreaking to see him sent off to Japan to the highest bidder.

I’ll Have Another is set to leave for Japan in August if he passes export requirements. The Triple Crown hopeful was scratched from the 2012 Belmont Stakes after a tendon injury just one day before the big race. I’ll Have Another finished his career with five wins in seven starts and earnings of $2,693,600, with four of those wins coming this year. 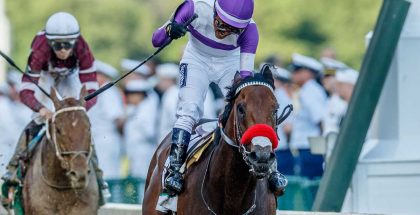