Home » Horses We Love » Two-Year-Olds to Watch; The Introduction
No Comments

Two-Year-Olds to Watch; The Introduction

Two-Year-Olds to Watch; The Introduction
Part 1 of 2

As we enter into the second half of the year, small signs of promise emerge from the thoroughbred foals of 2011. Talented two-year-old colts and fillies have captured the hearts of their loving owners and sparked interest in trainers all across the nation. Big hopes and dreams surround the little horses as fans wait for that magical moment when they hit the track running, possibly emerging into the next champion thoroughbred athlete.

Not only is the growth of a two-year-old thoroughbred racehorse intriguing, it’s fun and fascinating too! Get to know the personalities of these “up and coming” colts and fillies straight from the horses mouth with the information below. Check back for updates on their progress and success! 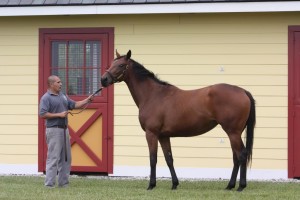 Ida Mae is a Siena Farm homebred filly expected to race sometime in October. The two-year-old filly is half-sister to Private Ensign.

Siena Farm is responsible for the success of Private Ensign, a Dale Romans trained filly who placed third in the 2013 Davona Dale Stakes. Fan favorite Dewey Square is also part of the Siena Farm family.

David Pope is excited about the racing potential of all three of his Siena Farm homebred two-year-old horses. Located in Paris, Kentucky, the President and Owner of Siena Farm introduced his colt, American Bond, and two fillies, Ida Mae and Sweet Cindy Lou, to Lady and The Track saying, “Definitely is special watching horses that we bred, foaled and raised, go on to race in the Siena Farm silks!” He added, “We hope that our Facebook family will endear themselves to these horses and follow them through their racing careers!”

American Bond, who is waiting on the Jockey Club to approve his name, is a son of leading sire Tapit, out of the Graded-Stakes winning mare Prospective Saint. The two-year-old colt is preparing to make his debut possibly in December. David Pope stated, “The feedback from our trainers in Ocala was very positive.” David added, “American Bond is a really neat horse, and fun to work with but you always have to keep an eye on him because he is playful and often forgets that he weighs 1050 lbs.! But once he steps on the track, he knows he is a race horse, and enjoys it!” 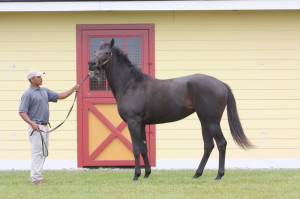 Sweet Cindy Lou is a two-year-old filly “with potential” that is expected to race in September.

Ida Mae is half-sister to Private Ensign. Her sire is Street Sense who has the top fillies Aubby K and Unlimited Budget recently winning graded stakes races. Ida Mae is likely to race sometime in October. Describing Ida Mae David Pope said, “Again, she is getting rave reviews from our Ocala trainer and has always been one of our favorites.” David added, “Ida Mae is a sweetheart and doesn’t mind at all being messed with, but when she is turned out in the paddock she transforms into “The Boss.” She is definitely the Alpha Filly. She enjoys the training routine, and should be a quick study.”

“Sweet Cindy Lou is FAST! A half sister to the very fast colt J Be K, this filly has potential”, David Pope stated about his two-year-old filly who is preparing to race in September. In regards to Sweet Cindy Lou’s personality traits David replied, “Sweet Cindy Lou is the toughest of the three. She doesn’t liked being messed with (picking feet, etc.), and at times tries to pick a fight. If there is one thing she is not that’s Sweet! But once on the track is a total professional.”

In conclusion David Pope added, “it’s too early to tell if the two-year-olds are going to be great, but we try to keep a few each year for our racing stable, and these three all have shown promise in Ocala over the winter. Our biggest challenge at this point is that two-year olds are still maturing and you must always show patience.” 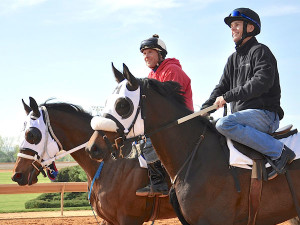 Desert Notion and Medalbu after their first workout from the gate.

In The Clutch Equine, LLC was founded in the spring of 2009 by Joseph Meyer, Tracy Meyer, and their son Ryan Meyer. ITCE purchased two exceptional broodmares Malibu Moment and What Else, whose sires are two of the world’s leading sires, Malibu Moon, and Not For Love. Malibu Moment and What Else have both had 3 foals since they were purchased. Their two fillies, Medalbu and Desert Notion are the two-year-olds that are now racing. ITCE acquired another mare, Sky Can Fly (Peace Rules) who just had her first foal by Medallist on May 5, 2013.

Co-Owner and Assistant Trainer Tracy Meyer stated, “Meyer Racing Stables is the name we gave ourselves as my husband also trains for other owners. So far, he has a very good first time starter record. We have the two fillies that we are ours, Medalbu and Desert Notion. In September of this year, we will be bringing in their siblings, Supero, a full brother to Desert Notion, and Janealee, a full sister to Medalbu, to Middleburg Training Center where we train.” 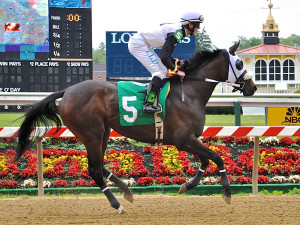 Tracy is excited about both two-year-old fillies very much like a proud mother would be towards her daughters. Tracy explained, “Medalbu and Desert Notion have been together since they were foals. They’ve trained together and now have raced together. Their first time start was at Pimlico on May 12. They raced side by side, off the pace by 10 lengths, yet came running down the stretch. Medalbu won the race and Desert Notion finished 3rd. The race was on Mothers Day, so it was a very exciting and meaningful day for me. Desert Notion raced again at Pimlico on June 2 and finished in 2nd place. They were both nominated for The Debutante at Churchill Downs. Medalbu was entered and finished 8th. As you know, Fiftyshadesofgold dominated the field setting a blistering pace! Congrats to her and her connections!”

Much like sisters, Tracy described the fillies as two very different horses stating, “Medalbu and Desert Notion have two totally different personalities, even though they were raised together and inseparable. Medalbu is very friendly and has wide eyes that don’t miss a thing. Desert Notion can be very protective of “her space”, yet once out of her stall she behaves like a professional.” 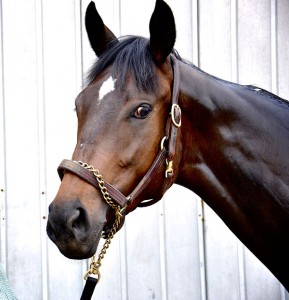 Tracy Meyer added, “As far as we are concerned, both fillies are showing signs of greatness at an early age. After Medalbu’s debut and win at Pimlico, a Bloodstock Agent contacted us. Doug O’Neill and his connections were interested in purchasing her. They sent a van down to The Training Center in Middleburg to pick her up and took her back up to Pimlico where O’Neill was training Goldencents for The Preakness. She was even escorted on the track to train that morning by Lava Man! It worked out to our favor that even though they were extremely impressed by her, Medalbu came back home to us.”

“Since they are still so young, they change everyday it seems, both physically and mentally. Since their initial race, they both matured considerably. When they pass horses, it’s a big confidence booster. We’ve trained them to relax, stay off the pace and come running. When they are successful, they know it”, Tracy explained.

Fans can expect to see Medalbu and Desert Notion on July 13, 2013 in the 16th running of The Tippett Stakes at Colonial Downs. Tracy Meyer said, “We have many options. Racing in PA makes sense since they are both PA bred, but we are also targeting other tracks such as Belmont and Saratoga as well as here in VA.”

In addition to Medalbu and Desert Notion, In The Clutch Equine is excited and looking forward to the careers of other young horses at their stable. Tracy stated, “Along with Medalbu and Desert Notion and their siblings that will begin training this fall, keep on the lookout for our newest. We also have a colt by Touch Gold and a filly by Smarty Jones. Both were foaled this spring and we already very hopeful for exciting racing careers for them as well.” 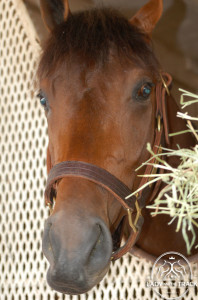 Almost Famous is a two-year-old colt in training currently stabled at Churchill Downs.

Chuck & Maribeth Sandford not only are the owners, along with WinStar Farm, of the great 2012 Florida Derby winner Take Charge Indy, they are probably some of the nicest people to know in the business. We’ve personally seen Chuck Sandford hanging around trainer Patrick Byrne’s stables to simply be present with his horses and support them. Some would say that one of the main ingredients in the success of Take Charge Indy’s career is Chuck Sandford. We believe Chuck Sandford brings the magic! Like a kid on Christmas morning, Chuck Sandford’s voice exudes excitement when describing his two-year-old colts.

Chuck Sandford explains his two-year-old colt Chivalrous is half-brother to Paynter out of Street Cry. He bought the colt for $1 million. Chuck stated he is hoping for great things with Chivalrous but they are taking it slow. He describes the May foul as immature but extremely smart!

Chuck Sandford also has the two-year-old colt Brilliant Messi in training, who is named after the European Soccer player Lionel Messi. Almost Famous is Chuck and Maribeth Sandford’s two-year-old colt who just recently returned to the training track after recovering from a chip in his ankle. Chuck Sandford “fell in love with Almost Famous” at the Palm Meadows sale and is extremely excited about him.

Chas’s Legacy is prepping with a few more workouts before he competes on the track but is expected to run within 30 days if trainer Patrick Byrne decides to do so. Chuck Sandford stated, “Chas’s Legacy is very green and didn’t have a clue during his first work but is coming along just fine!”

It should be exciting to follow the accomplishments of the two-year-olds over the next year! Lady and The Track would like to wish Siena Farm, American Bond, Ida Mae, Sweet Cindy Lou, The Clutch Equine, Meyer Racing Stable, Medalbu, Desert Notion, Janealee, Supero Chuck & Maribeth Sandford, Chivalrous, Brilliant Messi, Almost Famous, and Chas’s Legacy the best of luck in their young careers. Good Luck! Safe Run!

See Part 2 of the “Two-Year-Olds to Watch” interview by clicking here. 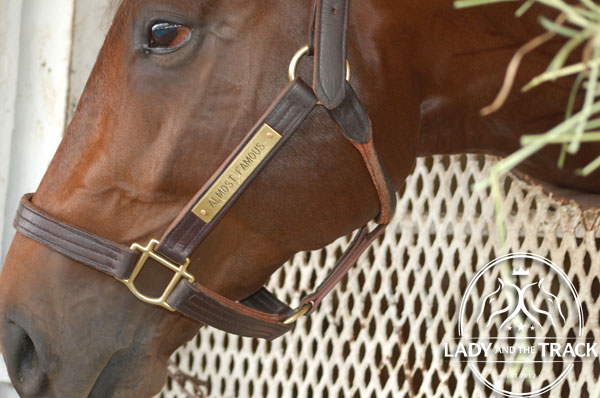 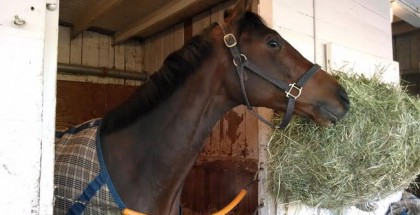