Opening day at Del Mar took place this week and to kick off the weekend, let’s look at the 2013 Eddie Read Stakes. The $300,000 Eddie Read Stakes was first run in 1974 and is run annually during the second half of July at the beautiful Del Mark Racetrack in sunny Del Mar California where the “Turf meets the Surf.” The race is open to 3 year-olds and up and is raced at 1 1/8 miles on the turf. This race has been a G1 since 1988 and can be an important prep for the Breeders’ Cup Mile. The 2011 and 2012 Eddie Read Stakes were both won by Acclamation and jockey Corey Nakatani has the most wins with five.

This looks to be a good field of west coast turfers who will have to deal with two invaders here. There are ten starters and a few multiple graded stakes winners, with Jeranimo, Feb Biz, and Slim Shadey to headline. These three are all very well known on the southern California tracks but none have recently ran their best race. I may be kicking myself later, but I like a few of the not-so-famous here.

My top picks for the 2013 Eddie Read Stakes are Sofast, Fly Lexis Fly and Lucayan. The French invader Sofast is the son of Rock of Gibraltar and was trained in France by Freddy Head. He finished last of seven in the Prix d’lspahan (Fr-1) on May 26th. All of his earning have been in France and he’s 2-2-2 in 11 starts. He has a new trainer in Gary Mandella who seems pretty jazzed about this horse. He arrived in California on Tuesday (July 16) and he’s going straight to the track. Julien Leparoux gets the mount. 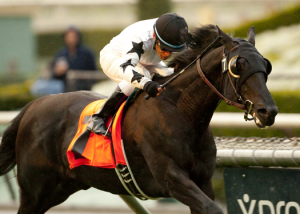 Fly Lexis Fly is trained by Peter Miller, who is one of my favorite California trainers and is a really climbing up the ladder on the west coast circuit. Fly Lexis Fly is the winner of two (GI) races in Peru in 2011 but winless in his last six starts in this country. He was third in an allowance race at 7F at Hollywood Park on June 14, finishing behind Paynter that day. This will be his first start on the turf with EA Maldanado to ride.

The French-bred Lucayan was fifth recently in the Shoemaker Mile behind Obviously who won by 3 1/4 length that day. Lucayan is trained by Neil Drysdale and was second to Obviously in his US debut on May 25th in the American Handicap (GII). He’s got Go-Go, Garret Gomez, up to ride. I’ve read a few blogs about Del Mar and it seems if he’s in the irons and the odds are good, go for it.

If I were to pick a horse out of Jeranimo, Fed Biz, and Slim Shadey to hit the board for the 2013 Eddie Read Stakes, I’d pick Slim Shadey as he was one of my picks last year in the Breeders’ Cup Turf. I like my three picks here in the Eddie Read Stakes even though I’m going against some handicap no-no’s with the new shooter on the turf in Fly Lexis Fly (I keep singing that song Fly Robin Fly in my head) and the Euro invader Sofast but hey, that’s what this is all about, taking a chance and gambling.

The Eddie Read Stakes is the 8th race of the day and set to start at 5:40 pm PDT.

Good luck to them all, run safe. Check your tickets at the window please, one mistake is one too many.