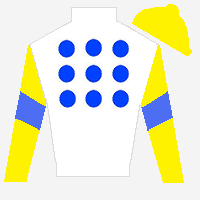 Visions of blue polka-dots fill Trixie’s head this week! Indy Point comes in with 9-2 odds for the 2013 Arlington Million with Gary Stevens on the mount.

Thirteen contenders take to the 2013 Arlington Million field ranging in ages from four to nine. Six-year-old defending champ Little Mike returns to the Arlington turf for his chance at a second trophy but will surely be tested against twelve other strong rivals during the 1 ¼ mile turf race. Experts report Little Mike isn’t what he used to be. The gelding’s trip to Dubai has taken a toll on the 2012 Breeders’ Cup Turf champion. The Dale Romans trained horse will break from post position #11 with Joel Rosario on the mount with 5-1 odds.

Longshot bet Nates Mineshaft is an Arlington local fan favorite in the 2013 Arlington Million. The six-year-old comes in with 30-1 odds with jockey E.T. Baird on the mount. Trainer Anne Smith was thrilled at the post position draw on Monday night and stated, “I’m happy to be in the race. Hopefully we can be speed from the inside.” She added, “Nates Mineshaft is doing well, holding up to his conditioning.”

The Dale Romans trained four-year-old colt Finnegan’s Wake also comes in with 30-1 odds. I’ve always like Finnegan’s Wake and have a soft spot for him but cannot bring myself to bet another dollar on him. Instead, I’m very interested in Indy Point, who breaks from post position #7 with Gary Stevens on the mount. Indy Point, with 9-2 odds, is trained by Richard Mandella and owned by GusMay-Fer out of Argentina, where he’s achieved great success. In his last race at Del Mar on July 24th, the four-year-old colt and Gary Stevens crossed the finish line first in the ungraded Wickerr Stakes. I’m going all the way this week with Indy Point for the 2013 Arlington Million. The two other talented horses I will throw into the mix include Real Solution and The Apache for absolutely no good reason!

The 2013 Arlington Million Stakes is the 10th race of the day with a 5:44 PM CDT post time. There are several other stakes races on the Arlington Park card that feature a few of our favorite friends. Three-year-old Rydilluc will break from post position #3 in the Secretariat Stakes at 4:23 PM CDT. We’re also excited to see locally owned Positively in the Straight Line Stakes at 12:45 PM CDT.

Related Links:
What to wear to the Arlington Million
Place a bet on Indy Point from home!

Look Like A Million Bucks at The Arlington Million