The Bernard Baruch Handicap (GII) is held annually for horses 3 years-old and up going 1 1/16 on the turf for a purse of $250,000. The race is set for Saturday August 31, 2013 at Saratoga Race Course in lovely Saratoga Springs, New York and is used as a prep for the Breeders’ Cup Turf race.

First run in 1958, the Bernard Baruch is named for the statesman, an advisor to various Presidents of the United States, a lover of horses, thoroughbred horseracing, and the life of America’s racetracks.

This chock-full of guts race is loaded with seven starters ready to run in the 2013 Bernard Baruch Handicap, which is the 8th race of the day on a card of 12 and set to start at 4:38 PM EDT.

Last year the Dale Romans trained son of Badge of Silver, Silver Max, ranked among the leading 3 year-old turf horses with six straight wins, three of them in graded stakes, culminating with a stunning win in the (GII) Virginia Derby at Colonial Downs. After a 9th place finish to Wise Dan in the (GI) Shadwell Turf Mile in October 2012 at Keeneland, Romans gave Silver Max some time off to rest for the year.

Silver Max was a little slow to return to form this year as he finished off the board in his first two starts. Third time’s a charm though and he soon scored in an ungraded off-the-turf stakes with a four-horse field June 1, 2013 over a sloppy track at Churchill Downs. Follow that up with a distant third in the Prairie Meadows Cornhusker Handicap on the dirt and it was time to try the grass again.

Silver Max looked all the better by regaining his imposing form last time out, wiring the field in his front running style in the (GIII) Oceanport on July 28th at Monmouth Park. He blew out that race winning by 5 3/4 lengths and scored his best Beyer Speed Figure to date of 102. You can be rest assured, we’ll be seeing his regal form taking the lead in the Bernard Baruch come Saturday. Silver Max flies from post #7 with R.Albarado up in the saddle.

Za Approval gets my approval to hit the board Saturday exiting from post #6 with J. Bravo in the irons. The late-blooming Ghostzapper prodigy Za Approval, trained by Christoph Clemente, beat pacesetter King Kreesa for his first Grade 3 score in the Appleton Stakes March 2013 followed by a win in the Red Bank Stakes on May 18th.. He exits a solid second place finish in the Shoemaker Mile Stakes on June 29th behind favored winner Obviously, the nation’s second-ranking turf miler. He’s scary good and in great form.

My long-shot horse in here is the 6 year-old Charles LoPresti trained Turallure. Turallure has made only six starts since finishing second in the 2011 Breeders’ Cup Mile and second in the Grade 1 Makers 46 Mile at Keeneland during the spring of 2012. He was off the board in five of those last races with one second place finish and given nine months to rest. In his most recent start, he was beaten by a head following an eventful trip in an allowance race here last month. After a rough past two years, this horse is in great shape and looks to be cycling back into form. Turallure gets post #3 with J.Leparoux for the ride.

Here we are looking at a silver lining again and a win in the 2013 Barnard Baruch Handicap for the shining Silver Max because “he’s back!” I wasn’t following this horse until last August when he hit his downward spiral. I found out through a friend he had Arizona connections being part-owned by Dana Wells, who used to play football for the University of Tucson and lives here in Phoenix. I was a little bummed he didn’t do too well, then they rested him for the fall. 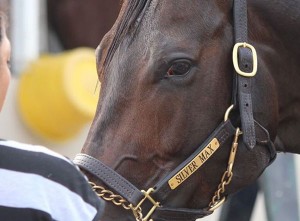 Silver Max is the favorite with 9/5 odds and Kari’s pick in the 2013 Bernard Baruch Handicap.
Photo: Mary M. McPeek

Well, after that run in the Oceanport, now I see what they have been talking about. When this little guy is game on and in form, he’s a monster. I look to see him out front fast to try and wire the field Saturday. I hope he makes it into the 2013 Breeders’ Cup Turf because I’m going again this year and would love to see him hit the board in a big-time way.

So for the win in the 2013 Bernard Baruch Handicap, it looks like Silver Max is my guy, with Za Approval and Turallure breathing down his back to hit the board. Good luck to all of the fellas running Saturday as well as their connections. Run home safe! 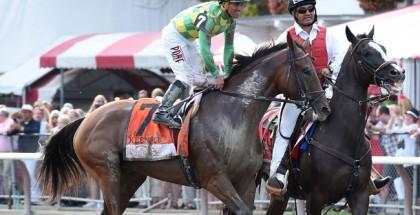 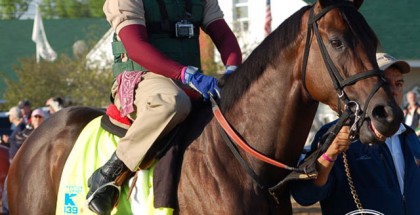 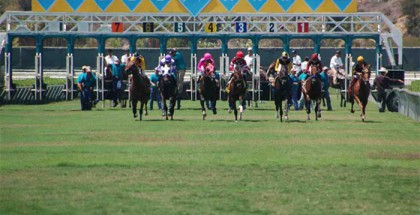