The 34th running of the Pennsylvania Derby takes place Saturday September 21, 2013 at Parx Racing in Bensalem, PA. The $1 million 1 1/8 mile race features some of 2013’s top three-year-olds as they make their final prep before the Breeders’ Cup World Championship. Will Take Charge is the heavy favorite in the Penn Derby among the experts with 2/1 odds. Will Take Charge has always been on LATT‘s radar win or lose! 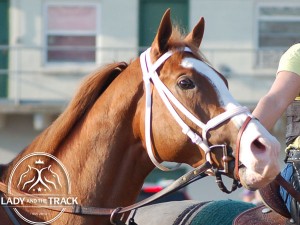 Will Take Charge is set to win the 2013 Pennsylvania Derby with jockey Luis Saez on Saturday, September 21, 2013 at Parx Racing.

D. Wayne Lukas, who has never won a Pennsylvania Derby throughout his Hall of Fame career, trains Will Take Charge who enters the Penn Derby with jockey Luis Saez. After a shaky start to his three-year-old campaign, Will Take Charge won the Travers Stakes and seems to be steadily improving with time. The Willis D. Horton owned colt is the “hot topic” in horse racing as he may possibly end up the champion three-year-old of 2013 even though he flopped at all three jewels of the Triple Crown.

Trainer Eddie Plesa, Jr. told us via email, “Speak Logistics came out of the Smarty Jones in great shape, it was the logical spot for us. Looking forward to going back.”

Trixie’s Pixies: Personally, I’ve always been a huge fan of Will Take Charge win or lose because he is the half-brother of Take Charge Indy. If you’re a fan of Lady and The Track, you know I’m not jumping on the Will Take Charge bandwagon now that he’s winning. What’s even better, now that the shady electrical device conspiracy exists, I like him even more! Secondly, I would like to see Speak Logistics come in the money. Plesa’s 2013 early Triple Crown contender Itsmyluckyday sustained an injury that sidelined him until mid-October. It would be amazing to see him bring home the win this weekend with Speak Logistics. Lastly, Fury Kapcori was on my mind all week but now I’m feeling Transparent and Java’s War to complete my picks…for absolutely no reason in particular. Good Luck! Safe Run! And remember ladies, never place a bet with your lovers’ money, it’s simply bad luck!

The Pennsylvania Derby is the 11th race of the day at Parx with a 5:45 PM post time. The Penn Derby takes place immediately after the $1 million Cotillion Stakes for three-year-old fillies. Gates open at 10:00 AM and the first 5000 guests will receive a free hat!

Related Links:
2013 Cotillion Posts & Odds
What to Wear to the Penn Derby