Silver Max Pays His Own Way to Breeders’ Cup

Silver Max Pays His Own Way to Breeders’ Cup

Dale Roman’s Silver Max earned his way to the 2013 Breeders’ Cup by winning the 2013 GII Shadwell Turf Mile (see replay below) on Saturday, October 5th but unfortunately will have to pay his own way.

Due to the heavy rain in Lexington, Kentucky, the $750,000 Shadwell Turf Mile at Keeneland was run on the synthetic polytrack instead of the turf (originally scheduled at one mile), which disqualified the first place winner of an automatic berth and paid entry into the 2013 Breeders’ Cup as part of the “Win and You’re In” challenge races. 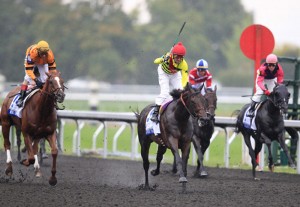 Silver Max crosses the finish line first in the Shadwell Turf Mile on Saturday, October 6, 2013. The turf race was moved to the synthetic polytrack due to heavy rain.
Photo courtesy of www.keeneland.com

Despite the disqualification, trainer Dale Romans reported Silver Max would head to the 2013 Breeders’ Cup World Championship on November 1st & 2nd at Santa Anita Park, he’ll just have to pay his own way.

Dale Romans also stated four-year-old Silver Max has shown great improvement since last year stating, “He had management issues. I threw him to the wolves probably a little quicker than I should have, but we backed up and regrouped and he’s strong this fall. We had a tired horse last fall – this fall we’re just peaking.”

Jockey Robbie Albarado expressed that Silver Max may have a bright future stating, “He’s got such a high cruising speed. Dale said, ‘Take it to them right away and let them catch you.’ He’s doing so well. The horse has been training forwardly – the best he’s been doing since he started with him. Dale prepared him well this year with stretching his races out. He’s a fresh horse.”

Jockey John Velazquez was aboard 2/1 favorite Wise Dan for the 2nd place finish and said, “He ran a good race; he just didn’t run his A game today. First time running on the Polytrack and it’s really wet and it seemed like he was tiring from it today. He couldn’t seem to get his footing. After that he kept trying. At the three-eighths pole, I thought I was going to be in control, that running down Silver Max was going to be easy, but when I went after him, he (Silver Max) started running again. It was only a matter of time whether Wise Dan would handle the track. He handled the track OK, but the track is different today — a lot of water. He had to work harder. Other than that he kept trying and ran hard.”

Lady and The Track would like to congratulate trainer Dale Romans, jockey Robbie Albarado, owner Mark Bacon & Dana Wells, and the brilliant Silver Max on their 2013 Shadwell Turf Mile victory!

Booty for Beauty; Judy the Beauty Heads to Breeders’ Cup 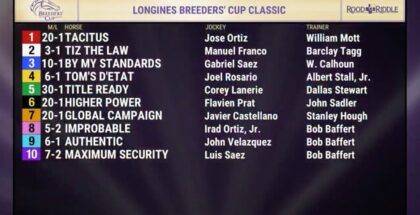