Royal Delta is a 5-year-old mare that will be racing at this year’s Breeders Cup World Championship at Santa Anita Park. Royal Delta was bred by Palides Investments N.V., Inc. and is owned by Besilu Stables. Her trainer is Bill Mott and to date Royal Delta has earned an impressive $4,691,126. Mike Smith is Royal Delta’s jockey and with Mike riding, Royal Delta was one of only two horses in Breeders’ Cup history to win back to back editions of the Breeders’ Cup Ladies’ Classic making Mike Smith the all-time leader for most Breeders’ Cup wins, with 17. 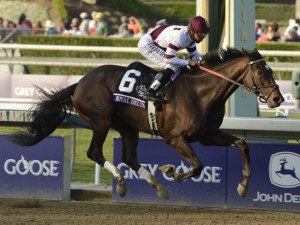 At the 2013 Breeders Cup, Royal Delta will be racing at the six-runner Distaff, which is the smallest field at the Breeders’ Cup 2013, but the race isn’t small as the purse for this race is $2,000,000, making this one of the most exciting races of the season. Royal Delta will be racing against two 3-year-old fillies, 2013 Kentucky Oaks winner Princess Symlar and Beholder, who are both strong contenders. Though Princess Symlar has defeated Royal Delta before, the odds are in Royal Delta’s favor. In fact, according to Wynn’s future odds, Royal Delta is the favorite to win this year’s race with 8/5 odds.

Bill Mott has Royal Delta posting back to back bullet drills after her second place finish in the Beldame, and Mott ensures that Royal Delta is at her best this fall at 4 for 5 in fall races. Even with competition from Princess Symlar and Beholder, Mott reported to DRF about Royal Delta saying, “You got to give her a lot of respect…She’s won three Grade 1’s. You can’t take any of them for granted, and we don’t take her for granted.” Royal Delta is set to give a good race at this year’s Distaff.

After winning the “Win and You’e In” Personal Ensign BC Challenge Race at Saratoga on August 25th, Royal Delta won a paid way into the 2013 Breeders’ Cup.

The Distaff takes place on Friday, November 1, 2013 with an approximate post time of 4:35 PM PDT.