From the East Coast to the West Coast, Emollient, who originally hails from Kentucky where she was bred at Juddmonte Farms Inc. and who trains in New York, is set to race at the 2013 Breeders’ Cup World Championship Filly & Mare Turf in Santa Anita, CA on Saturday, November 2nd instead of the dirt Distaff. 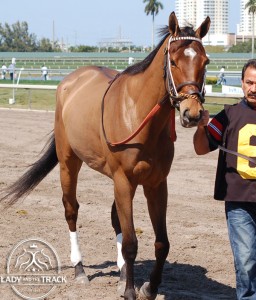 Emollient will take on the Breeders’ Cup Filly & Mare Turf instead of the dirt Distaff.
Photo: Emollient at Gulfstream Park, Trixie

Emollient has been training in NY with trainer William I. Mott. She’s a 3-year-old filly, who so far this year has had four wins with seven starts and has earned $852,100. As of this racing season, Emollient has become a multiple Grade 1 winner and she has been busy traveling and winning, including a major victory at Ashland Stakes at Keenland.

Emollient did have a bad break from the gate in the Spinster (see video below), but Smith recently reported to America’s Best Racing that what they were doing wasn’t working so they “had to go to Plan B, and it really worked…It’ll certainly keep her around a whole lot longer. At least she won’t have to do all the running on the front end and keep it going. It’s a great way to race if we can continue to do this.”

Though Emollient is up against tough competition, there’s always a possibility that this new strategy could work and Emollient could end up winning the Filly and Mare Turf, and the Eclipse Award for the Female Turf Division.

If you’re a fan of Lady and The Track you’ll know that we’ve watched Emollient closely since her early days. Lady and The Track would like to wish Juddmonte Farms, trainer William Mott, jockey Mike Smith, and the beautiful Emollient the best of luck in the 2013 Filly & Mare Turf. Good Luck! Safe Run!

Watch Emollient go from last to first in the 2013 Juddmonte Spinster Stakes on October 6, 2013.
https://www.youtube.com/watch?v=fpsmteS6f7w