Headlining the two-day 2013 Breeders’ Cup World Championship at Santa Anita Park in sunny California on November 1st and 2nd is the $5 million prestigious Breeders’ Cup Classic. All fourteen of the Breeders’ Cup races showcase the crème’ de la crème’ but the 1 ¼ mile dirt Classic draws in twelve of the world’s finest thoroughbreds. 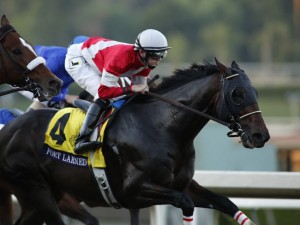 The Classic receives more expert opinions than a brand new mom does in the presence of her mother-in-law. I’m no expert, but I am really feeling Fort Larned, Ron The Greek, and Flat Out. Those are definitely my brain’s top three picks but my heart tells me to go with Mucho Macho Man and Paynter. I’d love to see Mucho Macho Man and Paynter cross the finish line first and will probably put my shoe shopping money on them for the sheer fact that their back stories are sweet.

Reigning 2012 Breeders’ Cup Classic champ Fort Larned needs no introduction. The five-year-old most recently won the Homecoming Classic Stakes at Churchill Downs. Fort Larned also won the Stephen Foster Handicap this year, where my beloved Take Charge Indy was pulled back due to an injury. Fort Larned will break from post position #7 with 6/1 odds Brian Hernandez, Jr. on the mount.

Flat Out, with 12/1 odds, will break from post position #12 with Joel Rosario on board. The William Mott trained seven-year-old finished 3rd behind Ron The Greek and Palace Malice in the Jockey Club Gold Cup Invitational. He also finished 3rd in the 2012 Breeders’ Cup Classic behind Fort Larned and Mucho Macho Man. So maybe we should at the very least bet him to SHOW. Flat Out’s career has been hot and cold but I like him regardless. 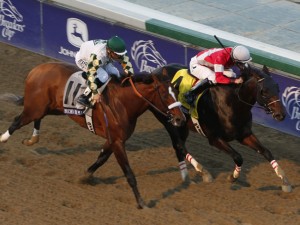 Mucho Macho Man and Paynter are both in a class of their own. If either one of these power house horses wins the 2013 Breeders’ Cup Classic I’ll literally cry tears of happiness. My favorite thing about this sport is when you truly see heart in the horse, in his owners and trainers, and in his fans. Mucho Macho man and Paynter both deserve the win.

Lady and The Track would like to wish all of the 2013 Breeders’ Cup Classic contenders the best of luck. Good Luck! Safe Run! …and remember ladies, never place a bet with your lover’s money. It’s simply bad luck!