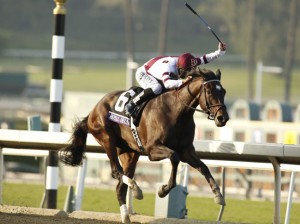 Royal Delta, Princess of Sylmar, and Beholder have all won Breeders’ Cup “Win and You’re In” challenge races which helped pave their way into the championship race today.

Five-year-old Royal Delta, with 8/5 odds, is gearing up for her third attempt at winning the Distaff. No one has ever won the Ladies’ Classic three times in a row so the win would be extra special to see for jockey Mike Smith and trainer Bill Mott. Royal Delta’s 2012 Ladies Classic win gave Mike Smith his 16th Breeders’ Cup all-time record win. Some experts say Royal Delta is losing her game and her age is beginning to show. Since the mare’s return from Dubai, Royal Delta has won two races and finished second in two races, the last being the Beldame Invitational Stakes where she placed second to Princess of Sylmar.

Princess of Sylmar, with 9/5 odds in the Distaff, won the 2013 Kentucky Oaks with 36/1 odds. The three-year-old filly has won eight out of ten races in her career, the last being her victory over Royal Delta in the Beldame “Win and You’re In’ race in New York. Trainer Todd Pletcher recently reported that that Princess of Sylmar’s owner, Mr. Stanco of King of Prussia Stable, was reluctant to send the filly to California. Todd Pletcher said, “He always had some reservations about bringing her to California as a 3-year-old and running against older fillies and mares. He wants to have her as a 4-year-old. So there was never anything the filly did to give us any reason not to want to continue looking at the Distaff. It was just that Ed had some reservations about a couple of things. When she beat Royal Delta in the Beldame, that certainly gave him some confidence that running against older mares was okay.”

Beholder, with 5/2 odds, enters the Distaff with jockey Gary Stevens. The three-year-old filly most recently won the Zenyatta Stakes on September 28th in front of 2013 Distaff competitor Authenticity. The Spendthrift Farm Beholder also finished 2nd behind Princess of Sylmar in the 2013 Kentucky Oaks. Experts report Beholder is extremely comfortable on the Santa Anita track and predict she may become the 2013 Breeders’ Cup Ladies’ Classic champion. 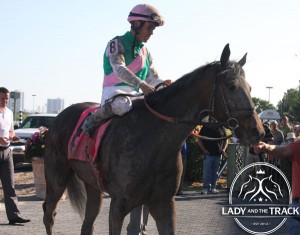 Trixie’s Pixies: Although I’d thoroughly enjoy witnessing Royal Delta make history today, my two picks include Beholder and Close Hatches. Three-year-old Close Hatches has been handled with care by trainer Bill Mott and has won five out of seven races throughout her career, most recently the Cotillion Stakes on September 21st where Street Girl finished 3rd. Close Hatches, with 6/1 odds, will run with regular rider jockey Joel Rosario today.

Lady and The Track would like to wish all of the contenders of the 2013 Breeders’ Cup Distaff the best of luck. Good Luck! Safe Run!