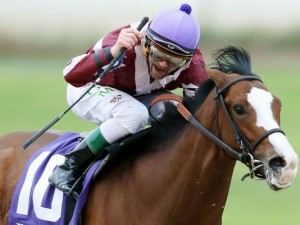 Rise Up and jockey Gerrard Melancon had a great race from start to finish in the 2013 Delta Downs Jackpot Stakes proving themselves to be strong contenders down the 2014 Derby Trail.
Photo: www.usatoday.com Coady Photography

Just days before the race, Coastline, trained by Mark Casse and coming off a three-length win in the Street Sense Stakes at Churchill Downs in October, was the 5-2 favorite, but Coastline ended up finishing in eight place.

Rise Up previously won the Lafitte Stakes at Delta Downs, however, Rise Up was the 3-1 choice for this year’s Delta Downs Jackpot. Rise Up is trained by Tom Amoss, and it seems that Rise Up’s training paid off as Rise Up and jockey Gerrard Melancon had a great race from start to finish proving themselves to be champions from beginning to end at the Delta Downs. They had a great start right out the gate with a good run and they never faltered as they led the race the entire way.

Casiguapo also had good race finishing second and Rankhasprivileges round out the top three in third place. There were ten 2-year-olds that were entered in the Delta Downs Jackpot this year. The race was set at 1 1/16 miles. The winner of the Delta Down Jackpot usually goes on to race in the Triple Crown Hunt and the winner also is awarded 10 points toward a possible starting position in next year’s Kentucky Derby, so there is a bright future ahead for Rise Up.

In related news, two-year-old Tepin won the 2013 Delta Downs Princess Stakes with Miguel Mena paying out $9.00 for the win! Tepin was awarded ten points towards her 2014 Kentucky Oaks pursuit.