Flat Out takes a win in the final furlong at this year’s Cigar Mile at Aqueduct Race Track taking home the $500,000 prize. Flat Out is a Grade 1 race winner with jockey Junior Alvarado. The Cigar Mile competition included two Breeders’ Cup winners, Groupie Doll and Goldencents. 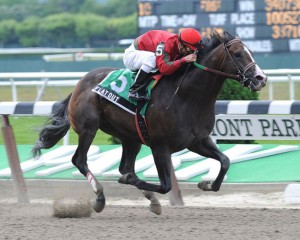 The pace setter of the 2013 Cigar Mile was Private Zone. Although Flat Out and Groupie Doll were in sight of the leaders of the race, things didn’t look good for them as they were off pace. However, Groupie Doll suffered a rough trip, keeping her run in tight quarters. Many of the favorites of this race had a tough messy run as they kept bumping into each other and were caught in a traffic jam that had developed on the rail as the contenders headed into the final turn. Flat Out was able to catch up taking a wide turn around the final turn and going into the final stretch. Junior Alvarado, Flat Out’s jockey drove hard through the stretch and took a 1 ¼ length win taking advantage of early fractions. This put Private Zone into second place. Private Zone had a decent race despite all the fractions, but wasn’t able to hold onto the lead and Verrazano took third place rounding out the top three.

Trainer Bill Mott gushed about Flat Out and told reporters, “This horse, I can’t say enough about him…He’s just been a real tough, durable horse, a horse that I’ve always felt may be as good at a flat mile as he is at 10 furlongs.”

Honor Code Wins The Remsen By A Nose