Streaming came out as the winner at the 2013 Hollywood Starlet Stakes at Betfair Hollywood Park in Inglewood, California, which was set to be one of the most interesting races of the year in its division. 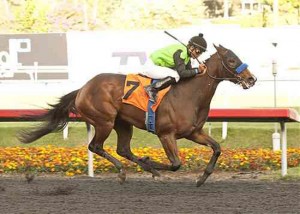 Going into the 2013 Hollywood Starlet Stakes, Rosalind was the lukewarm 3-1 choice on the morning line in the field of eight, but Streaming ended up winning for a 10-1 upset.
Photo: Streaming and jockey Martin Garcia
betfairhollywoodpark.com

Going into the race Rosalind was the lukewarm 3-1 choice on the morning line in the field of eight, but Streaming ended up winning for a 10-1 upset. Streaming just debuted three weeks prior to the Starlet Stakes and won as the 1-2 favorite at six-furlongs. Streaming was previously unraced until just about a month ago. Streaming now takes home the Grade 1 win and the $500,000 prize.

Streaming is a 2-year-old maiden trained by Bob Baffert, a Hall of Fame trainer. For most of the race Streaming stayed close to pace setter, Taste Like Candy, who was the 5-2 choice for the race. However, Streaming was able to take a slight lead into the stretch and ended up winning by 1 ½ lengths. Streaming is ridden by jockey Martin Garcia and this was his first win in the Starlet although he has ridden on fillies twice before, which were trained by Baffert.

Garcia said that this time “my filly was really sharp and I just let her break and was able to get a good position…I held my position outside and when I asked her to run she gave me more. She was very impressive.”

Baffert said of Streaming, “Her last two works really showed she could sit off a horse. You’re always hoping they’ll run like they train and how they’re bred. We’ve been lucky to win some Starlets and especially with this being the last one. She’s really special.”

Taste Like Candy in second and Utapable came in third, rounding out the top three at the Hollywood Starlet Stakes.

Look Rich in Velvet at the CashCall Futurity