The Ruthless Stakes is a non-graded stakes race held yearly since 1974 at Aqueduct Racetrack in Queens, New York. Run annually in January, it is a six furlong race for three-year-old fillies with a purse of $100,000 on the dirt.

This year’s race was set for Saturday, January 11th, 2014 and would have been the 37th running of the race which is named for the Hall of Fame filly, Ruthless, the winner of the inaugural Belmont Stakes in 1867. There apparently weren’t enough entries to run so the race was scratched. How sad is that? I really like this remarkable filly’s story so I thought I would share it. UPDATE: 2014 Ruthless Stakes is scheduled for Sunday, January 12th. 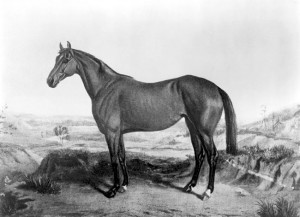 A drawing of Ruthless by famous equine artist Edward Troye.

Ruthless was owned and bred by Francis Morris and foaled on his farm in Throgg’s Neck, New York. She was sired by the imported stallion Eclipse and out of the imported mare Barbarity who also produced several other award-winning daughters collectively known as the “Barbarous Battalion”. The rest were all full-sisters to Ruthless being Remorseless, Relentless, Regardless and Merciless. I’m totally digging their names and too bad this set of sisters weren’t born a century earlier.

On June 19, 1867, Ruthless was sent out in the first Belmont Stakes at Jerome Park Racetrack. The race was run at a distance of 1 5⁄8 miles and she beat the colt De Courcey by a head. Rivoli came in third and the last place horse was Monday, also owned by Morris. Morris had originally intended Monday to win the race, but De Courcey’s speed was such that Ruthless’ jockey, in attempt to help out Monday, managed to win the race. Although seven other horses had originally been entered, the speed of Morris’ two horses was such that they all forfeited the race rather than face Monday and Ruthless. Since Ruthless’ victory, only two other fillies have won the Belmont Stakes, Tanya in 1905 and Rags to Riches in 2007.

Ruthless also won the 1867 Travers Stakes then run at 1 3/4 mile. The winning time was 3:13.25 and the second/third place finishers were R.B. Connolly/De Courcey. There was one false start for the race, but she took the lead at the half-mile pole and won the race galloping by two lengths.

Ruthless lost the St. Leger Race in Paterson New York at the Paterson Racetrack going 2 1/4 miles where she came in second to De Courcey but managed to beat #3, also owned by Morris, Jubal and Clement.

Ruthless ended her racing career with a record of 11:7:4. As a broodmare, Ruthless was the dam of the stakes-winning colt Battle Axe. He was an 1871 bay stallion sired by Monday, and in 1873 he won the Kentucky Stakes. She died in 1876, after being shot by a hunter who was on her owner’s farm in Westchester, New York.

The Ruthless Stakes is set to take place at Aqueduct Racecourse on Sunday, January 11, 2014 and is the 3rd race of the day with a 1:23 PM PDT post time. 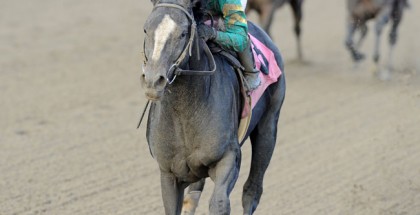 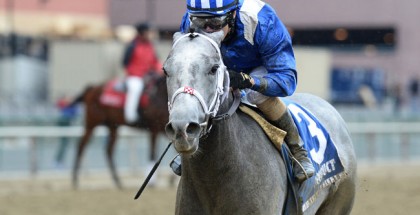