Trainer Todd Pletcher continues a winning streak with a win for Onlyforyou at the 2014 Forward Gal Stakes. Kentucky Oaks prep is well on its way with the 2014 Forward Gal at Gulfstream Park. The Grade 2 race is held at Hallandale Beach, FL and holds a $200,000 purse. The 2014 Forward Gal is seven furlongs and there were six 3 year-old fillies racing on Saturday, January 25, 2014. 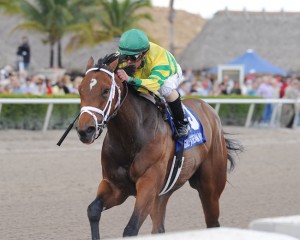 Onlyforyou was seen as the main contender with trainer Todd Pletcher who has dominated in this race in the past; he was very confident coming into the race. Pletcher’s confidence proved to be well founded as Onlyforyou took home the win with a margin of 2 ¾. A few days before the race, Pletcher had high hopes with Onlyforyou going into the Forward Gal stakes saying, “She’s been perfect in two starts, she was very impressive winning the allowance race so we’re very excited about stepping up in class and trying her against stakes company…she’s continued to train very well and we’ve kind of had this circled on the calendar since her last race.”

Previously, Pletcher has won two renewals of the Forward Gal, once with Broadway’s Alibi and once with Kauai Katie, both ridden by John Velazquez. Jockey Javier Castellano, however, is the one who rode Onlyforyou for the victory in the 2014 Forward Gal. Castellano directed Onlyforyou to an immediate lead at the beginning of the race, enabling the team to find a good spot on the rail and eventually taking off down the stretch for a time of 1:09.77. Castellano said “I didn’t expect her to be on the lead, but she was so sharp today…She did it so easy and broke on top. The way she did it was impressive.”

The other major contender going into the race was Flash Encounter, who was the only other multiple winner in the 2014 Forward Gal Stakes race lineup, however Flash Encounter fell short as Aurelia’s Belle took second and Resistivity took home third place.