Untapable Has a Big Win at the 2014 Rachel Alexandra Stakes 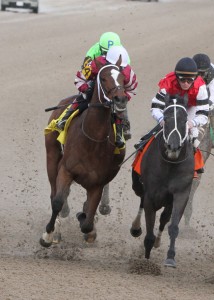 Untapable took a 9 ½ length in a 7 horse race. Untapable is trained by Steve Asmussen who said, “The filly [Untapable] acted extremely well today…we just think she’s a better mare than she was last year, and she showed it today.”

Untapable was ridden by Jockey Rosie Napravnik for the first start of the season. Napravnik was in a stalking position in fourth place, but Napravnik was able to get her to take the lead and run her to a decent lead in the final furlong. Napravnik said, “I had lots of confidence in her…Steve has done an excellent job with her…It was a wide trip which just goes to show you how much the best she was.”

Untapable, a Tapit filly was the 4-1 fourth choice beating out Got Lucky and Shanon Nicole who came in second and third place. At first it was Streaming and Army that were battling into the turn, and Express Model and Untapable were trying to advance up with Untapable being forced to run wide around the bend.

Untapable however, was able to pull away and run t a win with a considerable lead. Untapable is set to run in the Grade 2 Fair Grounds Oaks in March, though it is unlikely that she will win there with as big of a lead as she did in the Rachel Alexandra Stakes, Untapable has proved that she is a horse to contend with.