Esquire Horseplayers Episode 5 Recap; Saratoga Spoiler: This week the handicappers are in Saratoga Springs, N.Y. and they are all competing for a $100,000 prize. In the beginning of episode five, before the competition really gets rolling, viewers get more background info on the players. In a more touching moment, viewers got to see a softer side to Kevin “Cowboy” Cox seeing that it isn’t just Team Rotondo that has strong ties to Saratoga. Viewers get to see the plaque that Kevin had dedicated to his late father, Walter Cox at Saratoga and hear about how Cox came to Saratoga since he was a kid. Viewers also get a deeper look at Michael Beychok’s story and his miraculous win with longshot Glorious Dancer at the wire in 2012 at Golden Gate for a big win of $1,000,000. 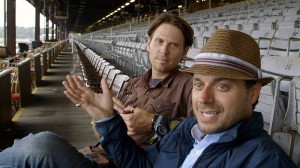 Christian Hellmers and Peter Rotondo, Jr. team up in episode 5 of the Horseplayers on Esquire Network.
Photo: Horseplayers facebook

The sentimental feelings soon fade though as controversy seems to spark in this week’s episode with horse Orino winning a race, helping out Team Rotondo and Cowboy Cox, only to be taken down due to a supposed infraction or slight bump into another horse moving Team Rotondo and Cox way back down in ranking, causing the horseplayers to cry foul play.

Beychok however, had a more successful time at Saratoga causing other horseplayers like Christian Hellmers to take interest and try to partner up with Beychok after striking up a deal with Rotondo Jr. to “double bomb” or place two tickets on a bet splitting winnings 25%/75%.

Hellmers was in a position where he had to partner up in order to win stating, “I really do need somebody else to allow me the chance to win this thing.”

Beychok, in the top 15, however, wasn’t swayed by Hellmers, stating, “horseracing is solo,” questioning the ethics of the whole process.

The 5th episode of Horseplayers ends on a somber note with Rotondo, Jr. and Hellmers in their partnership almost winning the $100,000, but it slipping through their fingers in the last race with an upset, but Beychok, though he didn’t win the competition, still came out in the top 15. But the sentiment of Team Rotondo, is that you have to keep your head up and keep on trying because there’s always another race, so we will see if the handicappers have better luck next time.

Why Vinceremos Should Win the Tampa Bay Derby