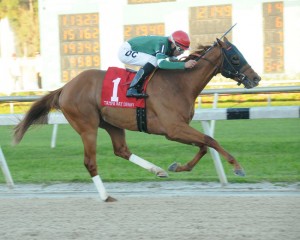 Ring Weekend was ridden by jockey Daniel Centeno in the 2014 Tampa Bay Derby and is trained by Graham Motion. Motion stated that Centeno and Ring Weekend didn’t exactly follow what was planned, however, things paid off in the end as the duo posted a win time of 1:43.71 for the 1 1/16 mile race.

Centeno said, “The plan was to hold off a little but no one wanted to take the lead so we jumped out there…once he got into the lead he was just galloping and riding comfortably. There was no straining so we kept up the pace.”

Motion said of the race, “I would like to say those were my instructions but they weren’t…but I’m thrilled with the race he ran and I thought we were capable of doing something good with the No.1 post.”

It hasn’t been decided yet what else Ring Weekend will do, but trainer Motion, thinks they will most likely run another Derby prep race, possibly the Wood Memorial. Whichever way Ring Weekend’s team chooses to take the horse, Ring Weekend certainly proved that he is a real contender.