Aurelia’s Belle is the Clear Winner at the 2014 Bourbonette Oaks: The 1 mile Bourbonette Oaks took place at Turfway Park on Saturday, March 22, 2014. The race featured eleven 3-year-old runners on a dirt surface. Aurelia’s Belle took home the win for the grade 3 stakes. Aurelia’s Belle was ridden by jockey Channing Hill and posted a time of 1:38.99. Sloane Square came in second place at ½ lengths over third place finisher Katie’s Eyes. 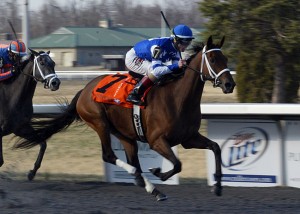 Aurelia’s Belle has done well under trainer Wayne Catalano and proved what she could do at Turfway in the 2014 Bourbonette Oaks. Aurelia’s Belle is the 75th stakes winner for her sire and she actually won her debut on Polytrack at Keenland. Sloan Square had the lead at the top of the stretch, but at the furlong mark Aurelia’s Belle proved to be too tough of a contender as she charged on the outside and took the win.

Jockey Channing Hill said of Aurelia’s Belle, “She was really comfortable the entire race. The speed went ahead but she sat behind them. She showed her class today. She tipped out and she didn’t even fully extend herself. She was geared down once she left her company.”

This is a huge win for Aurelia’s Belle and team as it earned 64 points (50 for Bourbonette Oaks, 10 for Davona Dale, and 4 for Forward Gal) towards a start in the grade 1 Kentucky Oaks at Churchill Downs in May.

Trainer Catalano said “We liked the timing of this going into the (Ketnucky) Oaks…that race looks like the next step. That’s (owner Jim Miller’s) dream, to win the Oaks. That’s why we’re here. At least we know we’ll get there.”

Well, Aurelia’s Belle will not just get there, she’ll get there as a major contender in the 2014 Kentucky Oaks at Churchill Downs.