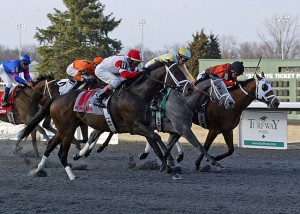 We Miss Artie is trained by Todd Pletcher and was ridden by jockey John Velazquez. Velazquez said, “I was a little wide going into the first turn but I found a nice spot down the backside. Right at the sixteenth-pole I had to drift away from them so he didn’t have to work so hard. Then I was able to get up at the wire.”