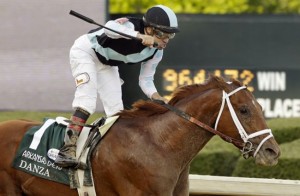 Ride On Curlin took second place in the 2014 Arkansas Derby and Bayern came in third place ½ length behind Ride On Curlin. Tapiture came in fourth place 2 lengths behind Bayern. Danza takes home the $1 million dollar purse along with a big shocking win and a posted time of 1:49.68.

Danza is trained by Todd Pletcher and was ridden by jockey Joe Bravo in the 2014 Arkansas Derby. With Bravo, Danza surprised the crowd in the final turn when he pulled away down the stretch for a significant enough win. Trainer Pletcher won the Derby last year with race horse Overanalyze, and it looks like his winning streak is continuing on.

Pletcher stated, “We’ve had good fortune there, good luck…It’s always been a favorite track of mine since I was a teenager. I’ve got a lot of fond memories of Oaklawn.”

Danza certainly did execute well at Oaklawn and we will have to wait and see if he runs in the Derby.