Kentucky Oaks 2014; Bob Baffert “happy” with Ria Antonia: Ria Antonia is on the leader board with 55 points and is set to run in the Longines Kentucky Oaks at Churchill Downs on Friday, May 2, 2014. Ria Antonia and jockey Rosie Napravnik worked the Churchill Downs track on Wednesday, April 23, 2014 and were clocked the third fastest out of a total of fifteen horses going six furlongs. 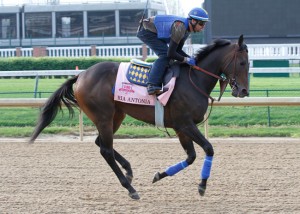 Kentucky Oaks contender Ria Antonia arrived to Louisville, Kentucky from Southern California on Monday, April 21, 2014. Trainer Bob Baffert was happy with the filly’s performance after her workout saying, “I was happy with the work. She went really nice and moved well over the track.”

Rio Antonia was foaled on April 4th, 2011 with sire Rockport Harbor and Dam Beer Baroness. Ria Antonia actually is the top offspring from grade 2 winning sire Rockport Harbor, though Rockport Harbor has another offspring, Rise Up, who was also on the trail to the Kentucky Derby. Ria Antonia is trained by Hall of Famer trainer Bob Baffert, who won the Kentucky Derby back to back in 1997 and 1998. Ria Antonia is owned by Christopher T. Dunn and Loooch Racing Stable, Inc. Loooch Racing Stable, Inc. is owned by Ron Paolucci. The three-year-old filly was bred by Lynn B. Schiff.

Ria Antonio will team up with jockey Mike Smith for the 2014 Kentucky Oaks. Mike Smith was on board Rio Antonia for their 2nd place finish in the Santa Anita Oaks. Last year, Mike Smith led 2013 Kentucky Oaks winner Princess of Sylmar across the finish line first.

Ria Antonia had some notable career honors besides the 1st place finish at the Breeders’ Cup Juvenile Fillies in 2013, including the 2013 Champion 2-year-old filly Sovereign Award, and being a Graded Stakes winner.

Beauty Products to Perfect Your Look at the Kentucky Derby