California Chrome and Victor Espinoza are the dynamic duo on everyone’s radar for the 2014 Kentucky Derby.
Photo: “Chromie” @CalChrome

California Chrome’s most recent final four-furlong workout took place on Saturday, April 26th at Los Alamitos Race Course in Southern California, the colt’s familiar track. The California-bred had completed an “easy” half mile in :48.20 with a gallop out in 1:01 under regular rider and teammate Victor Espinoza.

Art Sherman reported, “Victor told me he couldn’t believe how easy the horse went. He just said he felt so good. Victor wrapped up on him and didn’t let him do too much. He knows this horse so well. He’s been riding him and he’s been on him for all his works. It couldn’t be any better.”

The likely 2014 Kentucky Derby favorite is scheduled to ship from California to Kentucky sometime on Monday now that he’s completed the bulk of his training. Art Sherman reported he is very happy with California Chrome’s workout saying, “It was very good. Exactly what I needed for the horse. He doesn’t need much now. He’s ready. I just wanted to put some air into him. He’s happy and fresh. That’s the way I want to keep him for this race.” 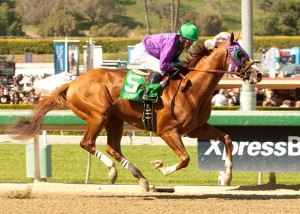