Dance With Fate in Good Order for Kentucky Derby 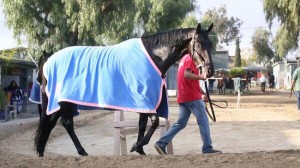 Dance With Fate, pictured above after his final workout in preparation for the Kentucky Derby, will team up with jockey Corey Nakatani on May 2, 2014 at Churchill Downs for the 140th running of the Kentucky Derby.
Photo: @TVG

Dance With Fate had his final work at Santa Anita Park on Saturday, April 26, 2014 and reportedly came out of his :47 half-mile work in “good order.”

Dance With Fate teams up with jockey Corey S. Nakatani for the 2014 Kentucky Derby and is trained by Peter Eurton. Eurton actually began his horse racing career as a jockey and was mentored under his stepfather trainer Steve Ippolito. Eurton became a trainer in 1985 and has had horses who have ranked as graded stakes winners and even had a 3rd place finish in the 2011 Breeders’ Cup Juvenile Fillies with Weemissfrankie.

Dance With Fate was foaled on February 16th, 2011 with sire sprinter and miler Two Step Salsa and mare Flirting With Fate and bred by breeder Best A Luck Farm LLC. Dance With Fate is owned by Alesia, Sharon, Bran Jam Stable and Ciaglia Racing LLC.