Kentucky Derby 2014; Samraat and Rick Violette Smell the Roses: Gotham Stakes and Withers Stakes winner Samraat earned a cozy fifth place position on the Kentucky Derby leader board with 100 points and is ready for the 140th running of the Kentucky Derby set to take place on Saturday, May 3, 2014. The My Meadowview Farm colt flew in from New York and arrived at the Churchill Downs track at approximately 6:30 PM EDT today. While Samraat prepares for the big day, trainer Rick Violette stops to smell the roses! 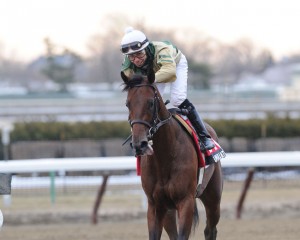 Samraat, pictured above with regular superstar jockey Jose Ortiz, is a leading contender in the 140th running of the Kentucky Derby on Saturday, May 3, 2014.
Photo: Coglianese/NYRA

Samraat’s trainer Rick Violette had a shot at the Run for The Roses in 2004 with colt Read The Footnotes. Read The Footnotes finished 7th the year that Smarty Jones won the Kentucky Derby. Rick Violette is just as excited about winning the Kentucky Derby with Samraat saying, “It’s pretty cool. I’m obviously excited; my whole family is going to be there. I’ve got a brother flying in from L.A. and another brother flying in from London. My sister and my parents are coming up from Florida. It’s pretty cool and they are very excited. This is something you really should enjoy, whether you go once or 100 times. There is no question that you need to slow down sometimes and smell the roses and this is certainly one of those times. No pun intended.”

Rick Violette, who is 61-years-old, said he enjoyed being at the Derby with Read the Footnotes in 2004, but that hasn’t lessened his enthusiasm. “I’m 10 years older, and probably not wiser, but as you get older you realize that these things don’t have to happen ever again, or 10 years from now. So do your job, cross all the t’s and dot all the i’s, but leave yourself some time to sit back and enjoy it, too.”

Before traveling to Louisville, Kentucky for the 2014 Kentucky Derby, Samraat had his final workout at Aqueduct Racetrack on Friday, April 25, 2014. Exercise rider Rodney Paine worked with Samraat just before 7:00 am in New York. The duo went an easy mile in 1:45.91, with an opening quarter in 27.79 and a half in 54.62 seconds per the NYRA.

Trainer Rick Violette stated the workout went smooth and reported,”I really didn’t want him to go too fast. We just wanted to get it done. Time was only important if he went too fast, and he didn’t. He went great.”

Samratt is ridden by famous jockey Jose L. Ortiz who has been on Samraat for all six of his career races. Samraat is trained by Richard A. Violette, Jr. and owned by My Medowview Farm and was bred by My Meadowview LLC. Samraat was foaled on April 16th, 2011 with sire Noble Causeway and mare Little Indian Girl.

Samraat is ranked as a multiple graded stakes winner and is looked at as a serious contender to look out for in this year’s Kentucky Derby.