Kentucky Derby 2014; Intense Holiday takes it easy at Barn 34: Intense Holiday is ranked as number 13 out of 29.350 horses this year and is on the leader board with 94 points as a major contender for this year’s 140th Running of the Kentucky Derby, held at the famous Churchill Downs in Louisville, Kentucky on May 3, 2014. After Sunday’s impressive workout that created a media frenzy on the Churchill Downs track, trainer Todd Pletcher instructed his crew to simply walk Intense Holiday around barn 34 today rather than take the colt to the track for exercise. 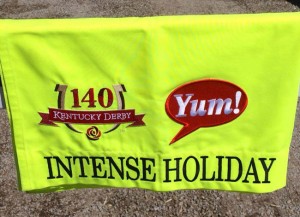 Intense Holiday and jockey John Velazquez team up for the 140th Running of the Kentucky Derby for trainer Todd Pletcher and StarLight Racing on Saturday, May 3, 2014.
Photo: StarLight Racing facebook

After today’s instructions were given, Todd Pletcher talked a little bit about how he goes about giving instructions to the jockeys before a big race saying, “Overall, I don’t like to give riders too many instructions. My preference is to give them a general plan for the race. I might tell them I think there’s a whole lot of speed in the race and that we probably want to take back, for instance. Or maybe let them know about a little quirk or situation with a particular horse. Things like that. But I realize that races often don’t come up the way you think they will. And that’s why you’ve got to leave room for that ‘audible’ by a rider. I’ve got to have trust in my riders that they’ll do the right thing. And they’ve got to have trust in me to understand that things don’t always go as you’ve planned.”

Todd Pletcher added, “In the case of a race like the Derby, the situation changes because of the multiple entries. With a regular race where I’d only have one runner going, you can talk your strategy in the paddock. But with the Derby, the paddock is just too busy. I talk to my riders ahead of time then, leaving me time to deal with all there is to do in the paddock that day.” 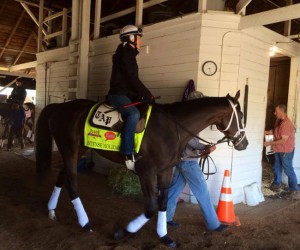 See video below for more information about Intense Holiday and StarLight Racing.