Home » News » No Opportunity for Hoppertunity
No Comments

No Opportunity for Hoppertunity, By Michael Fenrich: Thoroughbreds are majestic and powerful when they run. They can be very fragile as well and one bad step can change the dreams of running in the prestigious Kentucky Derby. 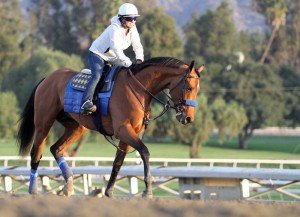 Sadly, Just two days before the 140th running of the Kentucky Derby, Hoppertunity was scratched for a leg injury by trainer Bob Baffert.
Photo: thorobid.com

Only two days away from the big race Hoppertunity who ran second in the Santa Anita Derby to California Chrome and was named second betting choice at 6-1 behind 5-2 favorite California Chrome got a minor foot injury and had to be scratched.

Hall of Fame conditioner Bob Baffert had to make the decision about Hoppertunity on Thursday May 1 towards the end of training. Hall of Fame jockey Mike Smith was supposed to ride Hoppertunity. All is not lost because Baffert and Smith will team up on Friday May 2 in the Filly Derby the Kentucky Oaks with Ria Antonia.

Baffert does have another horse in the Kentucky Derby Chitu.

Michael Fenrich is a guest contributor for Lady and The Track and has been featured on publications such as USA Today and Blood-Horse.

Kentucky Derby 2014; Ride On Curlin is all business for Borel