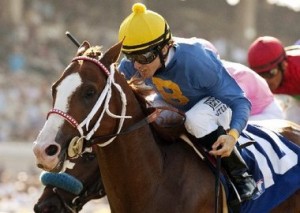 Horse racing fans will probably not favor Dry Summer because he had a shaky start to his career. It’s been four months since the colt won his only stakes race. Dry Summer showed promise on grass and synthetic tracks but was beaten badly on dirt. Dry Summer’s pedigree suggests he should run well on dirt. He comes from a mare that was a stakes winner on dirt and from Haskell winner Any Given Sunday.

Despite the negative comments amongst the experts, trainer Jeff Mullins is extremely optimistic about Dry Summer’s chances in the 2013 Sham Stakes. Trainer Jeff Mullins claims that Dry Summer has delivered a pattern of consistent workouts since November. Rumor has it that Dry Summer likes wet conditions and prefers to run on dirt. The forecast for the 2013 Sham Stakes doesn’t predict rain but Dry Summer at least has the opportunity prove himself on the dirt track rain or shine.

Dry Summer is owned by Michael House and Sam Britt and trained by Jeff Mullins. Jockey Joe Talamo will team up with Dry Summer in hopes to place first at the 2013 Sham Stakes.

Lady and The Track would like to wish Michael House, Sam Britt, Jeff Mullins, Joe Talamo, and the beautiful Dry Summer the best of luck during the 2013 Sham Stakes at Santa Anita Park.

The 2013 Sham Stakes is set for Saturday January 5 at Santa Anita Park with a 4:31 PM EST post time.