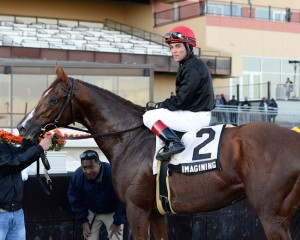 Imagining, shown above with jockey Joel Rosario in the Winner’s Circle after the Red Smith Handicap at Aqueduct, will try to attempt a “hat trick” for trainer Claude McGaughey in the Man O’ War Stakes on Sunday, May 11, 2014 at Belmont Park.
Photo: Adam Coglianese/NYRA

Phipps Stable and trainer Claude McGaughey won the Man O’ War Stakes the past two years at Belmont Park with Point of Entry in 2012 and Boisterous in 2013. Claude “Shug” McGaughey will try for a third straight win in the 2014 edition of the Man O’ War Stakes with Imagining, a six-year-old horse who most recently finished 2nd in the GI Gulfstream Park Turf Handicap on February 9, 2014 in Hallandale Beach, Florida. Jockey Joel Rosario was on the mount for the Gulfstream Park Turf Handicap and reports suggest Rosario will team up with Imagining for the 2014 Man O’ War Stakes.

Trainer Shug McGaughey remarked the Man O’ War Stakes has been the route for Imagining for quite some time saying, “That’s been our plan. We ran him one time in Florida and he ran a great race down there. We wanted to get him up here for the long races and get him started. He breezed this morning (May 4th) on the turf (four furlongs in 50.57 seconds) and went great.”

Imagining has finished first seven times out of fifteen lifetime races. The son of Giant’s Causeway had two very bad races, the first being the Dixie Stakes nearly a year ago at Pimlico Race Course in Baltimore, Maryland. The second bad trip for Imagining was the Joe Hirsch Turf Classic Invitational Stakes at Belmont Park where he finished in sixth place back in September of 2013.

Claude Shug McGaughey reported that Imagining proved himself after both of those bad races by saying, “The Dixie was just a ridiculous race, a throw out. Before the Joe Hirsch, he went a little bit nuts in the holding barn and Johnny Velazquez thought he rode him away from the gate a little bit too hard. But, he came back and won the Bowl Game and Grade 3 Red Smith, so his last three races have been good.” 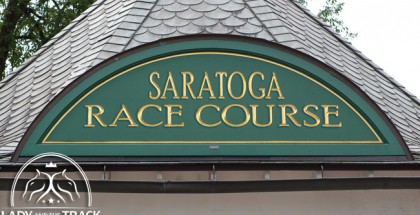