Happy Father’s Day Sires, By Michael Fenrich: When horse racing fans buy the daily programs to view all of the tracks, there are so many sires listed in the past performances for the horses that run that day. In horse racing the sires are the fathers of these majestic animals. It is really interesting to see all of these sires that have horses running at different tracks across the country. 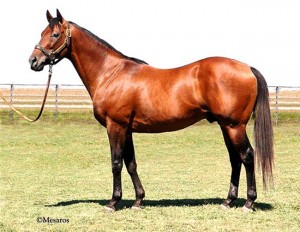 Some sires are alive and some sires have passed on. I am the scribe writing this piece. Before I became a freelance scribe I worked as a hot walker for a short time for trainer D.Wayne Lukas at Belmont. When I worked there I used to walk the late Lord Carson. Lord Carson was one of my favorites. He was so calm when I walked him and he pulled me to his water bucket in the stable. He was so fast as a sprinter on the track. In 2005 he died at Tommy Town Thoroughbred stallion farm in California. When he was a sire I always loved to follow his offspring, and even though he is gone now I still follow his offspring. That is why I like to read past performances from different tracks to follow sires such as the late Lord Carson. Now his grandchildren are running at tracks and it makes me so proud that I had a connection to it. His son Windsor Castle is standing at Taylor Mountain Farm in West Virginia. I always follow him now because he is making his father Lord Carson proud. I am proud of Windsor Castle as well because many of his offspring are running and I used to walk his father. Another offspring of Lord Carson who is doing well as a stallion is Tannersmyman who is standing at Woodbridge farm in Oakdale California. Every time I see a runner from Windsor Castle or Tannersmyman in the program or Equibase I smile because I was the hot walker connected to their father Lord Carson.

Also at the track when the horses are in the paddock during the post parade it is a good time to focus on the horses and see the similarities that they have from their sire. There is that saying, like father like son and thoroughbreds have similar traits. Just like the offspring that lost Lord Carson in 2005, this scribe and former hot walker, I lost my father four years ago. I am proud of my father because he raised me to be successful just like Lord Carson did for his offspring.