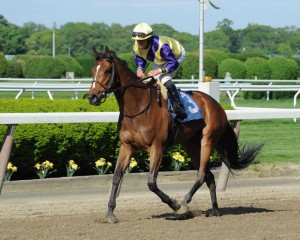 Sea Queen, pictured above with jockey Irad, Ortiz, will break from post position # 11 for trainer Christophe Clement in the Belmont Oaks Invitational on Saturday, July 5, 2014 at Belmont Park.
Photo: Coglianese/NYRA

French filly Xcellence ties up with American fan-favorite Room Service with 3-1 morning line odds. The Martin Schwartz owned Xcellence has won twice in seven lifetime starts, her most recent victory being the G3 Prix Imprudence on April 3, 2014. Trained by Francis Doumen, Xcellence is said to be in great form and comfortable in her surroundings in New York. Finishing first four times out of seven career starts, Room Service seems to be the biggest challenger for Xcellence. Like Xcellence, Room Service has handled the distance of traveling well and reports indicate the Wayne Catalano filly is cozy and happy. If Room Service crosses the Belmont Oaks Invitational finish line first, it will be her fourth straight victory.

Trixie’s Pick… Stonewater Stable’s Sea Queen is on my watch list for the 2014 Belmont Oaks Invitational. With 10-1 morning line odds, the Christophe Clement trained filly is coming off a win at Belmont Park in the Wonder Again Stakes on May 25th. Jockey Irad Ortiz, Jr. was aboard Sea Queen for the Wonder Again victory and teams up with Sea Queen again for the Belmont Oaks Invitational from the far outside post position. Why do I like Sea Queen? Besides the fact that the filly’s name represents my entire being, it’s nice to root for a local American horse in the spirit of our Independence Day weekend. I’m a big fan of Room Service too but Sea Queen’s 10-1 odds will enable me that extra bottle of champagne to celebrate Saturday night! Christophe Clement also enters undefeated Summer Solo, with 30-1 odds, for owner Sarah Leigh, which I’ll play for my longshot bet.

The Belmont Oaks Invitational is the 9th race of the day with a post time of 5:45 pm ET and will be aired on NBC Sports Network beginning at 5:00 PM ET.