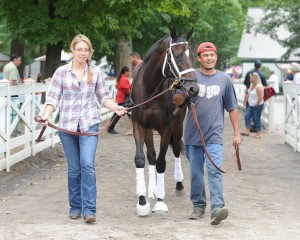 Stopchargingmaria, a three-time graded stakes winner, will attempt to garner her first Grade 1 when she returns from a two-month layoff in the $300,000 Coaching Club American Oaks on Sunday at Saratoga Race Course.
Photo: Susie Raisher, Coglianese/NYRA

The Coaching Club American Oaks, a 1 1/8-mile race for 3-year-old fillies, will be shown live on Fox Sports 1 during a broadcast that will run from 5:30-7:30 p.m. The broadcast, which will also show the Grade 1 Eddie Read from Del Mar, is part of the “Jockey Club Tour on FOX” series. The Coaching Club American Oaks will precede the Grade 1, $600,000 Alabama on August 16.

Stopchargingmaria, trained by Todd Pletcher for Mike Repole, is 2-for-2 at the Coaching Club American Oaks’ 1 1/8-mile distance, having won the Grade 2 Demoiselle last November at Aqueduct Racetrack and the Grade 2 Black-Eyed Susan on May 16 at Pimlico in her most recent start. Her first graded stakes win came in November at the Big A when she won the Grade 3, one-mile Tempted.

Last year at Saratoga, Stopchargingmaria launched her career by debuting a 5 ½-length winner in a maiden race in July and finishing a distant second to Sweet Reason in the Grade 1 Spinaway. She was third in the Grade 1 Frizette before her triumph in the Tempted.

After finishing fifth in the Grade 2 Davona Dale in February at Gulfstream Park and fourth in the Grade 3 Fantasy in April at Oaklawn Park, Stopchargingmaria regained winning form by rallying from sixth to take the Black-Eyed Susan by a neck.

“[The Black-Eyed Susan] was the race we were hoping for,” said Pletcher. “She seemed to get it back together. For whatever reason, she didn’t seem to thrive this winter in Florida. Her first two races were not what we were hoping for. I shipped her to Saratoga not long after the Fantasy, and she seemed to really blossom at that time. The Black-Eyed Susan was seeing her back in her best form.”

“We entered her in the [Grade 1] Mother Goose [on June 28 at Belmont] but decided when Untapable ran [in that race] that since our filly had already been multiple Grade 1 placed, the Coaching Club would be our best shot of winning a Grade 1,” he added.

Javier Castellano will ride Stopchargingmaria, the 8-5 favorite on the morning line, from post position 1.

In January, Unbridled Forever, a daughter of 2006 Kentucky Oaks winner Lemons Forever, captured the Silverbulletday at the Fair Grounds. Following that race, she was third in the Grade 2 Fair Grounds Oaks in March, Grade 1 Kentucky Oaks in May, and Grade 1 TVG Acorn on June 7.

In the one-mile TVG Acorn, Unbridled Forever raced 7 ½ lengths behind the leader in 12th early before making a mild rally to finish 4 ½ lengths in arrears to the winner, Sweet Reason.

“She has done well since the Acorn,” said trainer Dallas Stewart. “She’s easy to train, and the distance shouldn’t be a problem. [Jockey] Joel Rosario said he didn’t like taking dirt in her face in the Acorn, and she backed up before she came with a late run.”

Unbridled Forever, the 9-5 morning line second choice, will leave from post 2 with Rosario aboard.

Another filly stretching out from a one-turn mile is Taketheodds, who has won two straight at Churchill Downs. She broke her maiden by 3 ¾ lengths traveling seven furlongs on May 31 and made a five-wide move to take a one-mile allowance by 1 ¼ lengths on June 26.

“It’s a step up in class,” said Ian Wilkes, who trains Taketheodds for Robert Manfuso. “Going from [an entry-level allowance] to a Grade 1 is a big step up, but the filly is improving and it’s worth a shot. I’m not sure [how she’ll handle the 1 1/8-mile distance], but I think she’ll love going longer. I think two turns is what she wants to do.”

Brian Hernandez, Jr. has the call aboard Taketheodds, 8-1, from post 6.