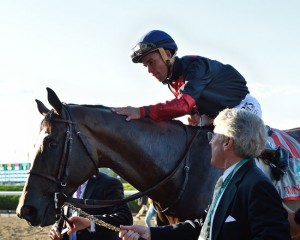 Tonalist will take on two other horses in the 51st renewal of the Jim Dandy Stakes that also competed alongside him in the 2014 Belmont Stakes including 9th place finisher Commanding Curve, and Wicked Strong, who finished the third jewel of the Triple Crown in 4th place in a dead-heat with California Chrome.

Tonalist is owned by Robert Evans and will team up with jockey Joel Rosario for the Jim Dandy Stakes. Tonalist’s trainer Christophe Clement reported he is excited to compete “on this level” and added, “He’s doing well. He came out of his work in good shape and I’m very excited to have Mr. Rosario ride him on Saturday. Everything’s good. I just have to train him and keep him fit and sound. Life is good.”

Christophe Clement boasted about how happy Tonalist is saying, “I think he’s fit, but I think he can move up from the race, too. He had a break after the Belmont and he put on quite a bit of weight. He’s been very playful and he thinks life is great. Unfortunately for him over the last three weeks he’s been back to work, but he still thinks that life is great. He’s a very playful kind of a horse, and that’s a great thing. He’s taking his work very well.”