Home » News » What Did I See in the 2014 Haskell Winner Bayern?
No Comments

What Did I See in the 2014 Haskell Winner Bayern?

What Did I See in the 2014 Haskell Winner Bayern?: For the first time in a long time, I was hitting every race yesterday, and hitting them big. When it came to the final race, I knew how the track was playing, and I knew how the race should set up. It SHOULD have set up for the closers, but when I saw how the track was playing all day, I knew Monmouth Park was more or less, a speedway for fast horses. With this knowledge, I knew the track would be perfect for a horse on the lead to steal the show, but I was still sure, with the speed of Social Inclusion, Bayern, Albano, Wildcat Red, and even Untapable, would be enough for a late runner to find some footing and get going. Boy, was I wrong! 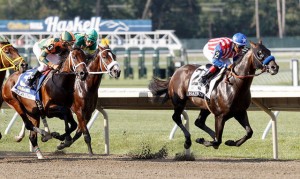 Bayern took these classy horses and ran them off their feet. My top pick, Medal Count, went the exact wrong way I was hoping he would go. He must like the deeper surface of Belmont, Keeneland, and turf would be his most likely favorite. When the race began, we saw Bayern go right for the early lead, and Albano, Wildcat Red, Social Inclusion, and Untapable, give chase. Bayern led the entire way, drawing clear in the stretch, by 7 and ½ lengths. Martin Garcia seemed to ride Bayern to the wire, even though there was obviously no need to do so. We all know from the Haskell, and past performances, that Bayern is a speed horse with only one dimension. He has to go fast, and he has to go fast in front of other horses.

Bob Baffert was called crazy from sending the speedy son of Offlee Wild to the 9F Haskell, and I cannot deny, I was one of those people. Baffert is obviously the king of the Haskell, winning it a record seven times in twenty-one years. Bob Baffert was planning to send the colt to the Kings Bishop, but after this dominating performance, Baffert believes that Bayern can win the Travers, and that is exactly where we will see Bayern next.

What I see, from an avid handicapper and pedigree researcher, is that Bayern won all his races in front running style, on the speedways of Santa Anita and Monmouth. He technically did win the Derby Trial at Churchill Downs, but was disqualified to second place. He also did this with 8F instead of 9F or 10F. When I see him in the Travers, I will give him respect, but I will not give him my money. Saratoga is not the speedway of Monmouth and Santa Anita, and that is the only way I see Bayern winning. When I see him in the Breeders’ Cup Classic at Santa Anita, I may give him a shot, due to the track, and how much speed is in the race.

Beginners Notes:
A Furlong is 1/8 of a mile. A length is equal to one horse length. 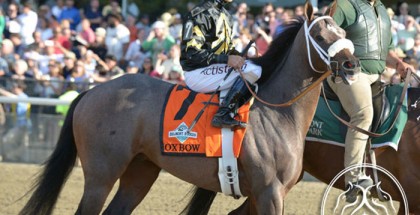