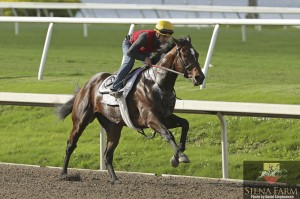 Dewey Square is a Siena Farm homebred colt that is showing great promise in becoming a 2013 Kentucky Derby contender. Dewey Square has placed first in two out of three starts earning $71,498. If you’re a fan of Lady and The Track, you’ll know that Dewey Square is one of our favorite colts that we’ll be cheering for all the way down the Derby trail!

Below is a Q&A between Trixie Hammer of Lady and The Track and Siena Farm’s President/Owner Mr David Pope.

We noticed on the Siena Farm website that you entered the racing industry in 1996. Was this your first experience around horses?
“Yes. I grew up in Akron, Ohio which is a long way from the beautiful thoroughbred horse farms of Bourbon County, Kentucky.” 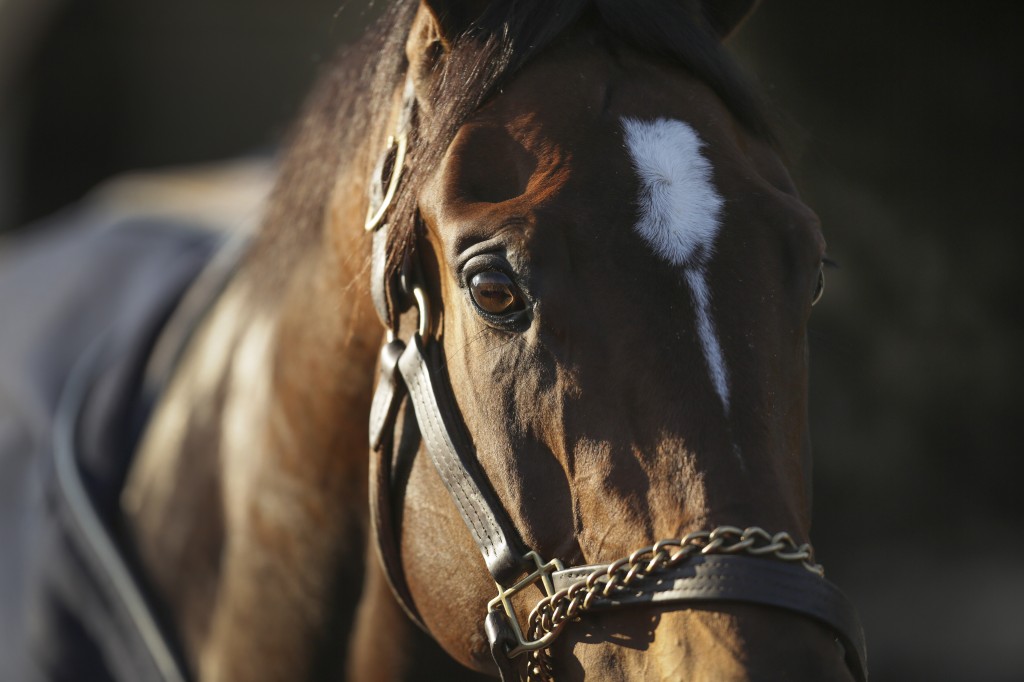 Siena Farm’s Dewey Square cools off after a breeze at Churchill Downs in Louisville, Ky., on Saturday Nov. 17, 2012. Photo by David Stephenson

How does Dewey Square compare with other colts you’ve had?
“Dewey Square, or Dewey 2 as people have been calling him, shows amazing potential to develop into a contender for the classics. So far, he has done everything asked of him. And he has shown he can run well over the surface at Churchill Downs. And he likes to race long.”

“He won his maiden race by 11-3/4 lengths at Hoosier Park. This was a great start to his career, and boosted his confidence when he stepped up in company in his next start, an allowance race (non-winners of a race other than maiden) at Churchill Downs. He won that race of 1-1/16 miles by four lengths.”

“His third and most recent start was the Kentucky Jockey Club Stakes (G2) at Churchill Downs Nov. 24. Dewey came out of this race much more seasoned because he had to deal with adversity and he learned to handle it. Trainer Dale Romans said after the Jockey Club: “A lot of things in the Jockey Club would have given Dewey excuses to throw in the towel and back up: the way the race was run, the way he was hung wide, the way they kicked away from him. But it was like from the sixteenth pole home he figured out what racing was all about. He dug in and tried to win. He made up a lot of ground. He figured it out at that point, that I’ve got to try to run these guys down.”

“The Kentucky Jockey Club was helpful to Dewey in several ways. He raced against 13 horses, which gave him experience against the type of large field he will experience in the Kentucky Derby. He gained ground off a slow pace, which is always a challenge, coming from 9th at the start and 4th at the first call. Despite racing wide into the stretch he finished third, only 1-1/2 lengths behind the winner after bearing down on the leaders in the stretch. This was an exceptional race for a horse making only its third start and in graded stakes company. The race confirmed that Dewey wants to run long.”

Dale Romans told us this about Dewey’s race in The Jockey Club Stakes: “It reminds me a lot of Shackleford’s Florida Derby. He finished second but that showed that he had the fight and the grit and the will to want to be a real good horse.”

“Dewey’s stablemate is Summit County, another Siena Farms homebred colt that started eight times last year, winning twice. Summit lacks the pedigree and flash of Dewey 2, but is an honest, hardworking, blue-collar colt who gives you his best effort every time he steps onto the track. Summit will start next in the Kitten’s Joy Stakes at Gulfstream Park on January 20th.”

“Another Siena homebred to watch is Private Ensign, a three-year old filly who is a great-granddaughter of the great race mare Personal Ensign. Private Ensign has started twice, winning once and finishing second once. She is also attracting attention as she has been training amazingly for Dale Romains at Palm Meadows Training Center in Florida.”

“It’s starting off as a very promising year for our racing stable.”

How has Dewey Square matured over the last couple of months?
“Trainer Dale Romans has remarked that Dewey 2 is maturing well, typically in the way you would like to see a 2-year-old growing physically into a 3-year-old’s body frame. The colt is still growing, as all 3-year-olds are at this time of year. Dale Romans has told us: “He has a lot of the standout qualities of a top horse, which are athleticism, build, pedigree, and the way he moves. He has a very fluid way of moving. He just bounces over the ground. There’s no wasted action. Those are the kind of horses that are cut out to be really good.”

“The big question, still unanswered, is how he will mature as a racehorse. At this point in a 3-year-old’s career these horses have to show if they can handle the increased amount of work asked of them. They need to show if they have what it takes to develop into a classic horse or if they will level off into having the career of a nice stakes horse without being a Kentucky Derby prospect. Time will tell. But we can say that Dewey has been training and working steadily. His works have been increased from five to six furlongs.”

What are your goals with Dewey Square? Any specific races you’ll be pointing him towards? Can you confirm he’ll run the Holy Bull on January 26? Will jockey Corey Lanerie take the mount?
“Dewey’s immediate goal is the Holy Bull Stakes at Gulfstream Park, 1-1/16 miles Jan. 26. Beyond that his goals are the Fountain of Youth Stakes and the Florida Derby. He is, of course, being pointed to the Kentucky Derby and we are hopeful he will participate in that race. As for a jockey, Corey Lanerie handled him with poise in the Jockey Club Stakes but Lanerie has not been confirmed as Dewey’s rider for the Holy Bull, but it is likely that he will be on board.”

“Postcards from Dewey Square” received 90 shares on facebook and surely added to his increasing popularity. Can his fans expect more postcards from Dewey in the near future?
Dewey loves writing his post cards to his fans. He has been posting about once a week and these postings might appear more frequently as the Kentucky Derby approaches.

Please describe Dewey Square’s nature and demeanor for his fans.
“Dewey is an intelligent, kind horse who like most really good horses seems very self-aware. He is like a 20-year-old athlete: somewhat full of himself, seeing no limits among the possibilities, and strongly believing he is invincible. He senses he is something special: you can see this deep in his eye and in the way he regards his surroundings, analyzing what is going on. This is Dewey’s world and he sees himself as No. 1. He’s a sharp dude, no doubt about it. And he’s been photographed so many times that now he looks for that camera click. He is the kind of horse who, as he goes along, will be warming to the fan attention. Give him a high-five: he’ll give one back to you.”

Siena Farm is currently working on a website for Dewey Square’s fans! You can view it here: www.dewey2.com. For additional information please visit the Siena Farm website. Here you’ll find up-front information for buyers on each and every Siena Farm thoroughbred. Siena Farm is the first in it’s industry to supply x-rays on their website to educate potential buyers of the status of a horse at any given time. Siena Farm’s vision is to become a world-class thoroughbred operation breeding 20-25 mares a year creating 20-25 stakes horses a year. The Siena Farm team takes great pride in their “boutique” breeding farm. Siena Farm’s key team members include, chairman/owner Anthony R. Manganaro, general manager/owner Ignacio Patino, and David Pope.