Stallion Feature; Candy Ride is a Sweet Deal for Breeders

Stallion Feature; Candy Ride is a Sweet Deal for Breeders: When we look at the General Sires list, the top two sires are Tapit and Kitten’s Joy, who, for a live foal, costs $150,000 and $100,000. What if you could get top quality, for less than half of those costs? Look no further than the #3 sire on the general Sires list. Candy Ride (ARG) is on his was as a relatively young sire, to one day topping that list! 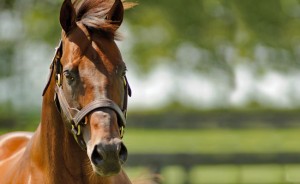 The champion was undefeated in his racing career, which began in Argentina, where he was bred. Candy Ride Candy Ride made his debut at Hipodromo de Palermo on the dirt, winning by 12-lengths. When he came to the states as a four-year-old, he encountered longer distances, which he easily handled. Candy Ride’s best race was the 10F Pacific Classic, in which he took the win away from Belmont Stakes runner up Medaglia d’Oro. This was also on a relatively foreign surface; Dirt. He had one an optional claiming when he came to the states, but this race was against dirt specialists. He conquered, and then, was retired to begin his next career.

Candy Ride’s top earner right now is his son Clubhouse Ride, whose earnings are a bit over $1.32 million. This 6-year-old horse has racked up 38 starts, and who just returned to the work tab, looking to make a 39th start.

Candy Ride (ARG) passes along stamina, as well as speed, to his offspring, due to he being a continuance to the Cryptoclearance sire line. We know that Candy Ride (ARG) has become a very good sire in a short amount of time, and how far he can go is limitless. For only a stud fee of $35,000, Candy Ride (ARG) is on his way to possibly topping the General Sires list. He is within striking range, and maybe his highly regarded son, Shared Belief, can give him the nudge he needs!