Home » News » Indy Point Is Healthy And Ready To Return To The U.S.
No Comments

Indy Point Is Healthy And Ready To Return To The United States: Indy Point, the Argentinean horse that was third behind Magician (Ire) and The Fugue (GB) in the Breeders’ Cup Turf last year, has completely recovered from the injury that sidelined him last year. Indy Point worked at La Plata -Argentina 4 furlongs in 49 1/5 handily, showing that the injury he suffered has fully healed. According to his trainer in Argentina, Raul Ramallo, he looks more mature and better than last year. 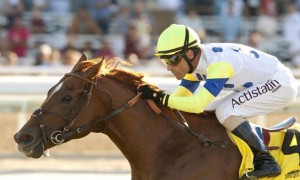 Indy Point, pictured above, will be examined on Tuesday by a veterinarian and if all is fine, he will work again on Saturday. If everything continues as planned, he will return to the U.S.

**UPDATE: Since the release of this article, Indy Point has been retired due to a minor injury that was found on an ultrasound after a strong workout. He will become a stallion at Haras La Quebrada.

Indy Point worked towards the center of the track, did it all so easy and finished the work as if he hadn’t exerted any effort. He has filled out physically and muscled up more than when he was a colt so he’s bigger and very strikingly handsome.

He will be examined on Tuesday by a veterinarian and if all is fine, he will work again on Saturday. If everything continues as planned, he will return to the U.S quickly. Ramallo said he’s not sad about Indy Point’s journey to the U.S but is proud of the job accomplished.

Indy Point, a son of Indygo Shiner – Red Point (Arg), by Parade Marshal won the Wicker Stakes and the John Henry Turf Championship Stakes (GII) last year in California and was trained by Richard Mandella in the U.S.

The horse is expected to be shipped in September to California to return to Richard Mandella’s barn. It is known that Mandella takes his time with the horses, but it looks like this time the period will be shorter because Indy Point has the experience in U.S racing.

If Indy Point continues to remain healthy, a bright future is expected for him next year, as a mature horse.