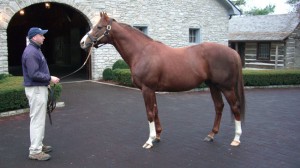 Recently moving into the #4 spot on the General Sires list, Giant’s Causeway is everywhere! He has multiple entries in the September sale at Keeneland, and his progeny are winning everywhere.
Photo: thestallionbarn.com

Now, some may think this is about Tiznow, but on the contrary, about the horse who gave him a game fight in the 2000 Breeders’ Cup Classic: Giant’s Causeway, or more commonly referred to as, “the Iron Horse.” Recently moving into the #4 spot on the General Sires list, Giant’s Causeway is everywhere! He has multiple entries in the September sale at Keeneland, and his progeny are winning everywhere. No surface is a concern with offspring of this versatile stallion. He has sprinters and marathoners on every surface! From Fed Biz to Imagining, this stallion was no disappointment.

As a racehorse, Giant’s Causeway was primarily campaigned overseas in Ireland and Great Britain, which all starts came on the grass. He also won from sprint distances to over 10F. At age two, Giant’s Causeway was undefeated, winning a maiden stakes, a grade three, and a grade one. At age three, he won five grade one races, a grade three, and finished second in four grade one races. Giant’s Causeway was never off the board in any of his starts. In fact, he was never worse than second in any race he ever entered. He earned $3,078,989 in a very impressive race record of 13-9(8)-4(4)-0. He was tough as nails, and would likely have become dominant over here, in America, had he had the chance. He entered stud in 2001 in Ireland, never looking back to the racetrack!

As a stallion, Giant’s Causeway was very well received. Initially standing in Ireland, his first crop included Shamardal (champion two-year-old), Maid’s Causeway (G2 winner of Rockfel Stakes), and Footstepsinthesand (G3 winner of the Killavullan Stakes). After a start like that, America had no choice but to find a way for Giant’s Causeway to come back to America. His stud fee was at it’s highest when it reached $300,000 for a single foal.

With nothing left to prove as a sire, he has held steady at a price of $85,000. He has runners and sires all over the place. He reached #4 on the general Sires list with Imagining and Abaco, who recently won or placed in graded stakes events. He also has sprinter Fed Biz, who recently placed second in the Pat O’Brien. His best marathon runner seems to be Irish Surf, who recently won the Cougar Handicap, a grade three event.

With a pedigree to die for, Giant’s Causeway was seemingly a shoo in to be a top-notch racehorse and sire. Out of the legendary Storm Cat, and out of the lovely Rahy mare, Mariah’s Storm, Giant’s Causeway has passed on his pedigree to many successful sons, who now stand stud all over the globe. Footstepsinthesand has sired multiple graded/group stakes winners. Eskendreya is the hot young sire that is just getting started at stud. We are all recently awaiting his offspring. First Samurai seems to be the top stallion in America who is carrying on the Giant’s Causeway sire line. He has sired 28 graded stakes winners, including Justin Phillip, Lea, Last Gunfighter, Carve, and Executiveprivilege.

Giant’s Causeway was one heck of a racehorse, and a very highly regarded stallion, which is still going strong. Giant’s Causeway is only 17 years of age, and definitely doesn’t show his age. He could easily be considered a bargain priced stallion, if you look at how much, and how often his offspring are winning. This year alone, they have earned Giant’s Causeway over $6 million dollars, and the year is not even over! Be on the lookout, constantly, for a offspring of Giant’s Causeway, in the future, and of the present.

Virtual Runners Wanted for 2014 Run For The Horses 5k