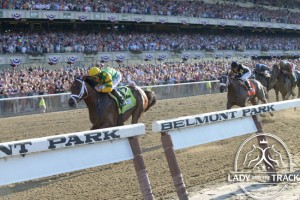 “This situation causes us to address retiring Palace Malice, although Dr. Larry Bramlage’s prognosis states that the horse should race to his true potential as a five-year-old, after sufficient time for healing this problem,” Campbell said.

“After winning four straight graded stakes, including the Grade I Metropolitan Mile, Palace Malice ran an uncharacteristic race in the Whitney on August 2, and worked several times in a lackluster manner following that race. When no apparent reason for that emerged, we flew him to Kentucky on September 2 and the examination revealed the reason for this change in form.”

“We are contacting those breeding operations that earlier have expressed interest in this horse and we will have discussions regarding his future.”

Palace Malice made 17 career starts during his three years of racing, with seven wins (six in graded stakes), four seconds and a third for $2,676,135 in earnings. Highlights of his career include a pair of Grade 1 wins in the Belmont Stakes and the Metropolitan Handicap; a trio of Grade 2’s – Jim Dandy Stakes, Gulfstream Park Handicap and the New Orleans Handicap; and a win in the Grade 3 Westchester Stakes.

Although Palace Malice was based in New York with trainer Todd Pletcher throughout his career, and won at both Belmont and Saratoga, he was no stranger to shipping: he also ran in Florida, Kentucky, Louisiana, and California.

For some weeks during 2014, Palace Malice sat atop the NTRA’s “Top Thoroughbred” poll, thanks to going four-for-four leading into the Whitney Stakes at Saratoga.

Palace Malice is by two-time Horse of the Year Curlin and out of the Royal Anthem mare Palace Rumor.