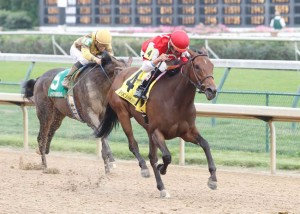 Trainer Dale Romans reported, “She’s a very good filly. She was pressed today and she drew off clear and looked good to me. I was hoping for an effort like her last one. I try to stay positive and when (partner) Tammy (Fox) worked her the other day she said she’d improved since her first race. A bunch of fillies were kind of the same. I’m sure everybody liked their filly but you don’t know until you line them up and she ran the way we were hoping.”

Dale Romans added that owner Tim Newcomer is excited about Christina’s Journey saying, “Tim’s a good man. He owns a little piece of Silver Max and he’s been around the game awhile. He’s enthusiastic and loves the game so it’s been fun and he’s had some good success.”

Is Christina’s Journey on the path to Breeders’ Cup greatness? Dale Romans replied, “I don’t know. There’s the Alcibiades sitting there but we’ll just have to see how she’s doing and let her tell me what we need to do. I don’t think she has to though. I think she’s the type of horse who could train right into a big race like that.”

Jockey Miguel Mena said after the big race, “This filly has tactical speed. She won on the lead at Ellis. She broke sharp and the instructions were to just make the lead; if somebody goes crazy then maybe she’s OK to start in second. But she broke well and had a nice steady pace; she was comfortable. Then when the rest of the field started to catch up at the quarter pole, I let her pick it up a little bit. When I hit her at the eighth pole, she picked it up and we won pretty easy. She’s pretty awesome; she wins at Ellis by almost five and then she beat this bunch easy. Like I said, I hit her a couple of times at the eighth pole and I felt her just pick it up right away and she galloped out strong. I think she’s great but we’ll see how good she is when we go to the Breeders’ Cup I guess.”