Home » News » Get to Know: Racing Has a New Millionaire in Vicar’s In Trouble!
No Comments

Get to Know: Racing Has a New Millionaire in Vicar’s In Trouble!

Get to Know: Racing Has a New Millionaire in Vicar’s In Trouble!: Ken and Sarah Ramsey has become quite an icon in the sport of horse racing. Not only has their horse Kitten’s Joy stamped his place in history as a phenomenal sire, but they also are the epitome of love and commitment. While Ken and Sarah have multiple most weekends, one win was an extra special gift this past weekend. While their whole family was gathered in Kentucky for the 56th wedding anniversary of Ken and Sarah, one horse was becoming racing’s newest millionaire. Vicar’s In Trouble went on to score the Super Derby for his owners and trainer, Mike Maker. I actually got to interview Jeff Ramsey (Ken Ramsey’s son) through email, as he is at the Keeneland September Sale, and he gave me some thoughts and feedback about Vicar’s In Trouble. 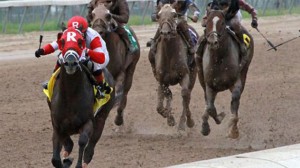 While their whole family was gathered in Kentucky for the 56th wedding anniversary of Ken and Sarah, one horse was becoming racing’s newest millionaire. Vicar’s In Trouble went on to score the 2014 Super Derby for his owners and trainer, Mike Maker.
Photo: espn.go

When I asked Jeff how he, and all those associated with Vicar’s In Trouble, felt leading into the race, he replied, “He has been training well and was looking very good. Our trainer Mike Maker thought he was doing great.”

While Vicar’s In Trouble hadn’t run to the potential he showed in the Lecomte (G3) and Louisiana Derby (G2), Vicar’s In Trouble was the class in Saturday’s Super Derby field. The top competition in this race had to be East Hall, which took the Ohio Derby in July. With only three graded stakes winners in the race, including Vicar’s In Trouble, this looked like an easy spot for him to find his winning ways again.

Again, I asked Jeff about Vicar’s In Trouble and how he had looked before the race. As I stated earlier, Jeff was not present for the race, but he did comment on Mike’s thoughts. “…he was great before the race. He is always very cool, calm, and professional.”

From the start, Vicar’s In Trouble looked pure class. Away nicely, he sat 3rd on the rail while Ide Be Cool and Gold Appointment went to the lead, with Ide Be Cool coming out with the eventual lead. Vicar’s In Trouble moved into second by the end of the first quarter, and pressed Ide Be Cool to honest fractions, before taking the lead on the turn. Coming into the stretch, everyone knew it would be Vicar’s In Trouble’s race to lose. Shaking loose under consistent urging from Rosie Napravnick, his jockey, he stormed home to win by at least five lengths. This win pushed Vicar’s In Trouble’s earnings to $1,128,900.

I always like to find out what these horses are like around the barn as well! We have seen horses who like to beg for treats or get agitated if you try to handle them too much. According to Jeff, “[Vicar’s In Trouble] is pretty normal around the barn.” He doesn’t have any quirkiness that I was informed of.

While we don’t know where we will se Vicar’s In Trouble next, we can expect that the Into Mischief colt loves the 9F distance, and a fast track. As for his class, he is on his way to showing it on a grander stage as he continues to grow and mature. He has a lovely pedigree and will continue to shine.

To learn more about Vicar’s In Trouble and Ramsey Farm visit ramseyfarm.com.