Competitive Edge May Have the Edge on Competition

Competitive Edge May Have the Edge on Competition: When Super Saver won the Kentucky Derby, it was probably the worst time to do so. 2010, the market was probably the worst for sending a stallion to stud. The market was so bad, that no one wanted to shell out the money to stand the Kentucky Derby winner who failed to win another race. WinStar Farm, basically, did not have another choice than to stand the stallion themselves. They marketed and tried to get the best mares they could to the young stallion. He had a lot to prove, since he hadn’t really shown his potential on the track, despite winning the Kentucky Derby. 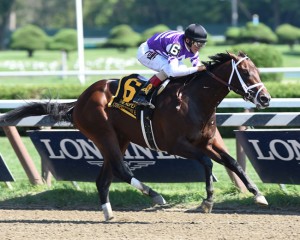 WinStar seems to have the stallion off to a fantastic start. He already has two graded stakes winners and three stakes winners in his first crop. He is off to a fast start. He had two runners in the Hopeful, Competitive Edge and I Spent It, which finished 1-2.

Let us look closer at Competitive Edge and why he is possibly the top two-year-old colt as of right now.

Competitive Edge can certainly get the award for most improved in a short amount of time. Debuting against seemingly no one, Competitive Edge took off and never looked back. He battled with King Tontos before staking loose and taking a nice hand ride to the wire, over 10 lengths ahead of second place finisher, Today’s Agenda. One horse he beat that day, and again in the Hopeful (G1) was Sharm, who finished third in the grade one event.

Competitive Edge is bred on a very interesting cross. He is the only graded stakes winner bred on the cross of the Maria’s Mon sire line over the Cape Town sire line, but you can find a stakes winner in Softly Lit, by Latent Heat. If we look into the fourth and fifth generations of the pedigree of Competitive Edge, a large amount of inbreeding can be found. Although the closest inbreeding is the Seattle Slew and Mr. Prospector in the fourth generation, one can also find Buckpasser, Secretariat, and Northern Dancer.

Competitive Edge, at a quick glance, should be able to keep getting more distance as he moves on through his career, toward a possible start in the Kentucky Derby. His damsire was Seeking the Gold, who was a very highly regarded sophomore. He raced twelve times in his career, only finishing out of the top two once, which came in the Kentucky Derby. Competitive Edge is out a durable, but low class mare.

Competitive Edge hasn’t returned to the work tab since his Hopeful win, but consider him a major threat as the races get longer, tougher, and more prestigious.

He is likely to show up next month’s Champagne Stakes on October 4th, and whether I Spent It, or even Sharm (Hopeful third place finisher), is unknown, but Competitive Edge is likely to be the favorite next out, and for good reason!