Home » News » Stallion Feature: Medaglia d’Oro is No Disappointment at Stud
No Comments

Stallion Feature: Medaglia d’Oro is No Disappointment at Stud

Stallion Feature: Medaglia d’Oro is No Disappointment at Stud: Rachel Alexandra is arguably one of the best female racehorses of recent times, and some would say one of the best in history. The filly with a whole lot of speed and the ability to carry it two turns. She was quite a star, and still is! A lot of race fans are following the whereabouts of her first foal, Jess’s Dream, and her yearling filly by Bernardini, who does not yet have a name. Rachel Alexandra made more than herself a star. Her sire, Medaglia d’Oro became a very desirable sire from the get-go, but after producing Rachel Alexandra from his first crop, he became a commodity. For the Stallion Feature of the week, we are going to get to know the very expensive, Medaglia d’Oro. 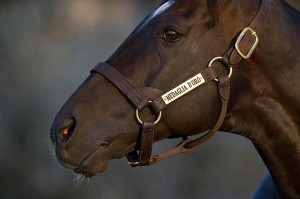 As a sire, Medaglia d’Oro was well received. In his first crop, he produced multiple grade one winner and Horse of the Year, Rachel Alexandra.
Photo: bronwenhealyphotography.blogspot.com

From the beginning, a lot was riding on Medaglia d’Oro to be successful. He was the son of Irish champion El Prado. He was out of the Bailjumper mare Cappucino Bay. Bailjumper was carrying on the Damascus sire line as well. Some believed that is what was able to carry Medaglia d’Oro to victory in the long run.

At age two, Medaglia d’Oro failed to break his maiden, but did so when returning at age three. He moved quickly into graded stakes company, taking the San Felipe Stakes at Santa Anita Park. He then stepped it up again, hoping to win a grade one in the Wood Memorial, but couldn’t get past Buddah, who was able to hang on by a head. Medaglia d’Oro did make it to the Kentucky Derby, and the whole Triple Crown series, in fact. He finished fourth in the 2002 Kentucky Derby, behind War Emblem. He would come back two weeks later, finishing a dull eighth in the Preakness Stakes. The lackluster performance did not give bettors the confidence they needed to bet the horse. Medaglia d’Oro was lost to the Triple Crown hopeful War Emblem. While that dream died at the start, another unbelievable event was happening. Sarava, the longest shot on the board, would outduel Medaglia d’Oro for the Belmont Stakes win. Sarava became the longest shot in history to win the Belmont Stakes.

As the season moved on, War Emblem faded out of the picture, by Medaglia d’Oro was just starting his winning ways. After the Preakness, Medaglia d’Oro would never finish off out of the top two for the remainder of his career. He would go on through is three-, four-, and five-year-old career winning grade one and two races. He would add the Travers, Whitney, and Donn to his resume. He would finish second in the Breeders’ Cup Classic twice, and in 2004 Dubai World Cup, before retiring to Darley Stud in Kentucky. He would retire with a 17-8(7)-7(6)-3 record and earnings of $5,754,720.

As a sire, Medaglia d’Oro was well received. In his first crop, he produced multiple grade one winner and Horse of the Year, Rachel Alexandra. As of lately, Medaglia d’Oro hasn’t neared that same ability to produce a horse of that caliber, but he has several stakes winners (17) and multiple graded stakes winners (7). In the grade one winner’s category, two G1 winners represent him. Just this year, Coffee Clique represents him, as well as Lochte and Valid (G2 winners). He also has distance runner Micromanage, who recently won the 1 ¾ mile Birdstone stakes.

Medaglia d’Oro is represented by 7 crops of racing age, and lifetime earnings of over $48 million dollars. He has sired two champions and several other very good horses. He continues to instill distance in the modern thoroughbred, and will continue to do so.